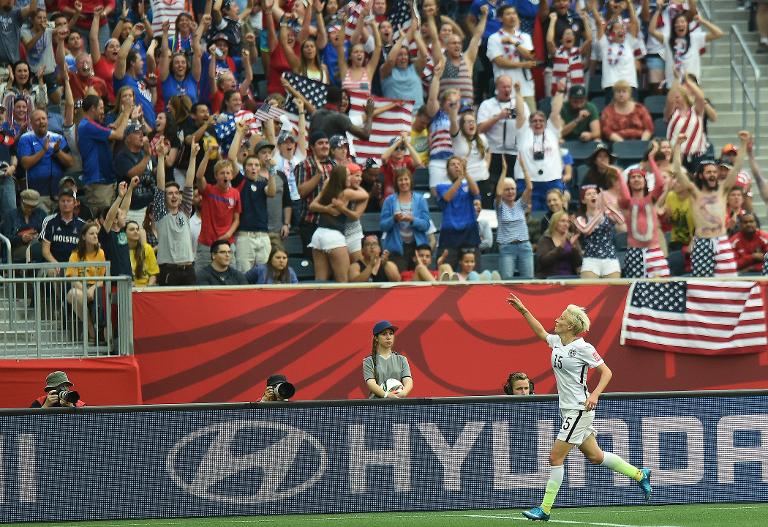 A double from midfielder Megan Rapinoe helped get the United States off to a 3-1 winning start in a tough test against Australia in the Women’s World Cup on Monday.

Favourites for a third title along with fellow two-time winners Germany, the Americans came up against a tenacious Australian side before Rapinoe’s double on 12 and 78 minutes and a Christen Press goal on 61 sealed victory.

Co-captain Lisa de Vanna marked her 100th cap for the Matildas by scoring after 27 minutes as the Australians dominated the first half.

It was the 36th goal for De Vanna since making her international debut in 2004.

Only for solid goalkeeping by Hope Solo in the US goal, the damage could have been worse for the 2011 runners-up.

As it is, Jill Ellis’s side are top of Group D with three points, followed by Nigeria and Sweden, who played out a 3-3 draw earlier, with Australia bottom.

In the next game on June 12 in Winnipeg Stadium, the United States will play Sweden with Australia up against Nigeria.

The 1991 and 1999 winners, ranked second behind the Germans, were given a stiff test by the 10th-ranked Matildas on front of a largely American crowd at Winnipeg Stadium.

Solo was tested early by Emily van Egmond, but the American goalkeeper tipped the ball over the crossbar.

But the Matildas got their equaliser after a good spell of possession, Michelle Heyman passed to De Vanna, who made no mistake, firing into the side netting.

US captain Abby Wambach was largely uninvolved for most of the game, with her chance to score off a Rapinoe free-kick headed wide.

But Press got the Americans back in the groove when she finished off a Sydney Leroux cross.

Fifteen minutes later, Rapinoe sealed the game with an impressive solo run down the field to fire past a helpless Melissa Barbieri in goal.