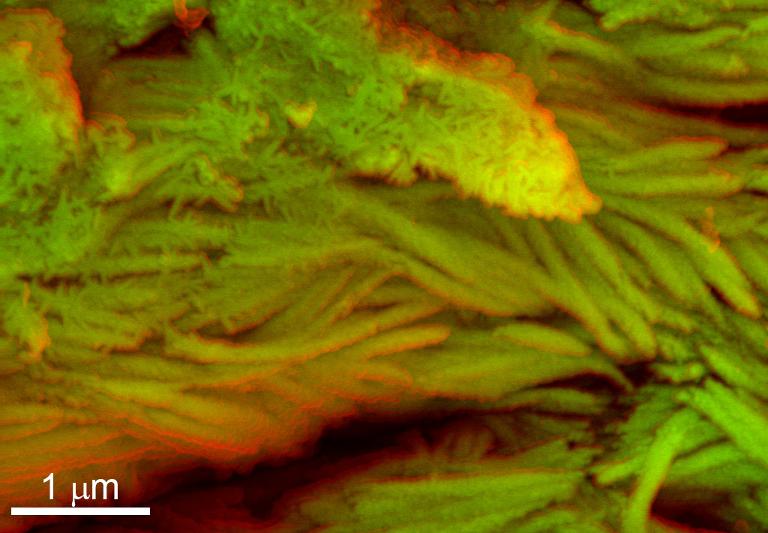 Scientists said Tuesday they have discovered what appear to be red blood cells and collagen fibres in dinosaur bones, a find that may boost prospects of prising organic remains from a much wider range of fossils.

Using molecular microscopy, a British team analysed eight bone fragments from dinosaurs that lived some 75 million years ago, in the Cretaceous period.

The fossils were so poorly conserved that it was impossible to tell precisely what type of animal some of them came from, study co-author Sergio Bertazzo from Imperial College London told AFP.

The samples included the claw of a meat-eating dinosaur, a few toe bones from a ceratopsid (a group that included the horned Triceratops) and a duck-billed hadrosaur, and rib fragments from an unknown species.

All the bones are from the Dinosaur Park Formation in Alberta, Canada, and have been in the Natural History Museum in London since they were collected about 100 years ago.

Other researchers have previously found remnants of organic material in dinosaur bones, but in exceptionally well-preserved fossils — which are few and far between.

“Therefore we indicate that the likelihood of finding organic material in fossils is much higher than previously thought, at least at the microscopic scale,” said Bertazzo.

It had long been thought that protein molecules cannot survive for longer than four million years.

Bertazzo and a team used a special microscope which uses a beam of heavy atoms to make infinitely small cuts in a sample at the nanometric scale (a nanometre is a billionth of a metre).

“The same microscope also has a robotic arm with a micro needle that can be used to pick up and move things inside the microscope,” explained Bertazzo.

“So, combining the beam and the needle, we could cut small bits of the fossils and perform an analysis to check for any fragment of amino acids.”

The team had set out to analyse gaps left in bone by decomposed organic material, instead finding structures that appear to be red blood cells, and fibres similar to collagen, a protein which makes up the bulk of connective tissues in animals.

“Totally blown away!” is how Bertazzo described the team’s breakthrough, while cautioning that further evidence is needed to confirm the nature of the structures.

“This was absolutely not what we were expecting to find at all. It actually took quite a while for us to be convinced of what we saw.”

The team compared their ancient soft tissue to an Emu blood sample, and intriguingly found “similarities”.

Dinosaurs are distant ancestors of modern-day birds, and scientists are hoping this type of research will reveal how, and when, a cold-blooded lizard gave rise to warm-blooded birds with a fast metabolism.

In vertebrate animals, the smaller the blood cell, the higher the metabolic rate, said Bertazzo.

“If we can find blood cells in lots of different dinosaurs, the range in size might provide an independent line of evidence for when dinosaurs became warm-blooded,” he said.

The main breakthrough of the research is to show that this type of soft tissue preservation is likely much more common than once thought, and Bertazzo said he “cannot even begin to speculate about what can be found in future.”

As for the possibility of one day discovering DNA, however, “many more studies should be done before we are even able to say if it is possible or not”.