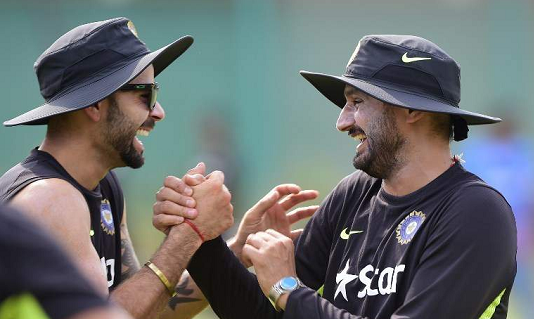 Fatullah: Virat Kohli’s proactive and aggressive style of leadership will be tested when India take on sprightly underdogs Bangladesh in the one-off cricket Test starting in Fatullah on Wednesday.

Kohli was anointed with full-time Test captaincy after Mahendra Singh Dhoni quit in the middle of the Australia series. The Bangladesh Test match will be, in essence, the start of a life without Dhoni for the team, which comprises cricketers of an average age of 26.

There will also be a sense of deja vu when Kohli walks out alongside his Bangladeshi counterpart Mushfiqur Rahim at the Khan Saheb Osman Ali Stadium on Wednesday.

One of India’s most successful captain Sourav Ganguly also started as a full-time captain against Bangladesh some 15 years back in a one-off Test match that was played at Bangabandhu Stadium in Dhaka.

Only difference is, this is Kohli’s third Test as the skipper while that match marked Ganguly’s captaincy debut.

For Kohli, as he starts a new chapter in his so far glittering career, it will also be a test of his tactical acumen as he would need to decide on whether India would go with six batsmen and four bowlers with a specialist wicketkeeper or with an additional bowler to ensure that taking 20 wickets is not a problem.

On paper, it’s another David versus Goliath battle with India having won six out of the seven Test matches between the two countries. Bangladesh drew just one in Chittagong in 2007 with the help of rain.

But Bangladesh have been on the rise after a lion-hearted show in the World Cup, where they disposed off England to make it to the last-eight stage.

The World Cup was followed by handing Pakistan a shocking 3-0 ODI series defeat and drawing a Test match, which has not only raised the profile of the team but also earned them a bit more respect from the opposition teams than what they had been used to getting earlier.

Also the ‘firm belief’ of their supporters that a controversial ‘No-Ball’ in that fateful World Cup quarter-final match against India robbed them off a fair chance, will also add spice to the contest.

Kohli would not like to take the next door neighbours to be the proverbial ‘banana peel’ that minnows often turn out to be in such mismatched contests.

The task will be cut out for the Bangladeshi bowlers, led by their fastest pacer Rubel Hossain and wily all-rounder Shakib-al-Hasan, as they face the challenge to stop a formidable batting line-up, which is capable of posting a monumental score in helpful conditions.