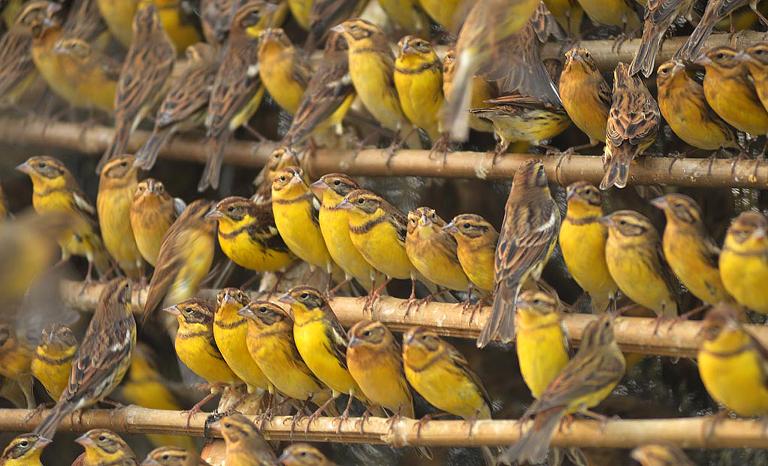 A bird that was once one of the most abundant in Europe and Asia is being hunted to near extinction because of Chinese eating habits, according to a study published on Tuesday.

The population of the yellow-breasted bunting has plunged by 90 percent since 1980, all but disappearing from eastern Europe, Japan and large parts of Russia, said the study, published in the Conservation Biology journal.

Following initial population declines, China in 1997 banned the hunting of the species, known in the country as the “rice bird”.

However, millions of these birds, along with other songbirds, were still being killed for food and sold on the black market as late as 2013, said the study.

It said consumption of these birds has increased as a result of economic growth and prosperity in East Asia, with an estimate in 2001 claiming one million buntings were consumed in China’s southern Guangdong province alone.

The birds breed north of the Himalayas and spend their winters in warmer southeast Asia, passing through eastern China where they have been hunted for more than 2,000 years, according to the conservation group BirdLife International.

At their wintering grounds, they gather in huge flocks at night-time roosts, making them easy prey for trappers using nets, the group said.

The songbird, which nests on the ground in open scrubs, is distinctive for its yellow underparts.

The paper in Conservation Biology drew parallels between the migratory bird and the North American passenger pigeon, which became extinct in 1914 due to industrial-scale hunting.

“The magnitude and speed of the decline is unprecedented among birds distributed over such a large area, with the exception of the passenger pigeon,” the paper’s lead author, Dr Johannes Kamp from the University of Munster, said in a statement released by BirdLife International.

“High levels of hunting also appear to be responsible for the declines we are seeing in yellow-breasted bunting.”

Yellow-breasted buntings have since 2013 been classified by the International Union for the Conservation of Nature as an “endangered” species due to rapid population decline from trapping outside their breeding grounds.