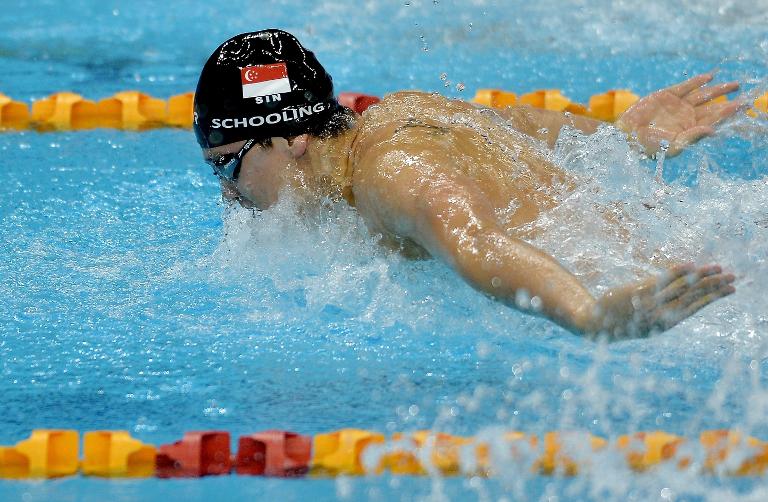 It’s not often a swimmer from Southeast Asia makes waves on the world stage, but Singapore’s Joseph Schooling looks poised to do just that.

The baby-faced 19-year-old, who is based in Texas, is not only dominating the Southeast Asian (SEA) Games, he’s doing it with world-class performances.

With four titles already, all in Games record time, as he seeks nine in total, he’s setting himself up nicely for next month’s world championships — and then, the 2016 Olympics.

“This will wake up some of the guys out there in the other countries,” Schooling’s University of Texas head coach Eddie Reece told AFP at Singapore’s Aquatics Centre.

The veteran Reece said he was impressed not only by Schooling’s times, but also by the assured way he had handled the intense pressure of a home meet.

Rather than shrink in the spotlight, Schooling has grown, milking the thunderous applause as he strides into the packed swimming venue.

“It scared me when he walked out and everybody went nuts. That can either scare you to death or charge you up, and obviously he did it the right way,” Reece said.

Schooling already has three event-record wins in freestyle — not his favourite stroke — including a 50m of 22.47sec, which broke Singapore’s 33-year-old national mark.

But Schooling specialises in butterfly, and his 200m of 1:55.73 on Monday placed him seventh in the world this year.

His success hasn’t come overnight, but is the result of years of training under his coach, Sergio Lopez.

“You’ve got to remember from the eighth grade on, Sergio trained him, and to train somebody from that age so that they can continue to progress is hard to do. Most people can’t do that.”

Schooling, who speaks with a thick American accent owing to his prolonged stay in the United States, is under no illusions about the importance of his move to Texas.

“I think that is why I’m performing so much better, because I’m surrounded by guys that want to be Olympic gold medallists, they want to make the US Olympic team, they want to be the best in history.

“So that kind of rubs off on me. I strive for bigger and better things when I’m around them and I think we feed off each other. It clearly shows just how much improvement I’ve made just by going to college the first year.”

Schooling played a leading role at the opening ceremony and is an unofficial poster boy for the Games, but he hasn’t always been so popular in his home country.

Barbs came his way after he was granted a rare deferral of compulsory national service until after the Olympics while he trains in Texas.

During last year’s Asian Games, his Singapore-born father Colin released a video insisting Joseph was a “true son” of the country after he was labelled a foreigner.

And officials launched an investigation after receiving a tip-off that Schooling left the Incheon athletes’ village without permission for a night out.

Schooling had already finished his events, including becoming Singapore’s first Asiad swimming champion since 1982 when he won the 100m butterfly in a Games-record 51.76.

With public sympathy shifting to his side, he was let off with a warning a month later.

Reece said Schooling wouldn’t attempt anything like nine events at the July-August world championships in Kazan, Russia, and was more likely to go for three or four.

“At the world championships, if you get on the podium you’ve done a heck of a job. You don’t have to do it in five events,” he said.

“Sergio and I have talked about it, we want to see how the end of this meet goes and we’ll decide from there. He won’t be doing too much.”

Reece added: “His skills fit this kind of schedule for this meet. And it’s all good — there’s a certain degree of mental toughness that you get from doing all that thing.

“And he’s already tough, this will give him a little bit more. Especially if he continues doing comparable times, that’s a heck of a start.”

When Schooling reaches Russia, expect him to follow his usual pre-race routine — a big wave, a big smile, headphones on, waggling his arms to keep them loose.

“Just listen to my music, focus on myself, absorb the crowd basically, just kind of soak everything in, use it to your advantage,” he said of his preparations.

It’s working for him so far.