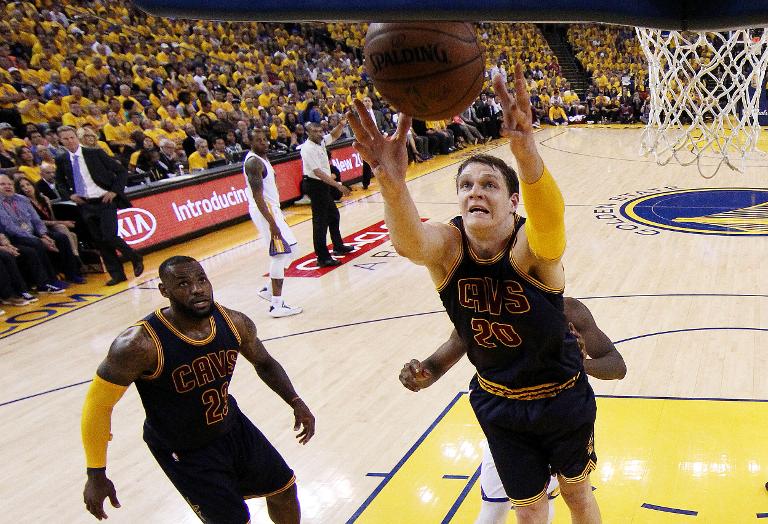 Russian centre Timofey Mozgov, who wasn’t even with the Cleveland Cavaliers when the NBA season began, suddenly finds himself a crucial player in the team’s quest for a championship.

The 7-foot-1 (2.16m) giant is the first Russian to play in the NBA Finals and has proven a key asset for the injury-hit Cavaliers, who are level at 1-1 with Golden State in the best-of-seven series entering Tuesday’s game three at Cleveland, where the Cavs have won 26 of their past 28 starts.

Mozgov is averaging 16.5 points and nine rebounds for the Cavaliers, who used his size advantage on Australian centre Andrew Bogut of the Warriors to run their offensive plays to him when superstar LeBron James took a brief rest in game two’s 95-93 Cleveland win.

Mozgov, obtained in a deal with Denver after Brazilian big man Anderson Varejao tore an Achilles tendon in December, provides secondary scoring support for a Cleveland team that lost forward Kevin Love to a separated shoulder in the first round and star guard Kyrie Irving to a fractured left kneecap in the finals opener.

But beyond that, his interior defensive work foils many chances for Golden State, his rebounding eases some of the pressure on the boards upon James and rebound specialist Tristan Thompson and his positioning away from the ball helps teammates get better scoring opportunities.

Mozgov, who helped a Blatt-coached Russian team win Olympic bronze at London in 2012, is benched at times as well when the Cavaliers need to match the speed and quickness the Warriors can bring.

“We play the lineup we need to play to match up properly with them and at the same time not lose an advantage at the other end,” Blatt said.

In game one, only Irving, James and Mozgov scored after half-time and the Cavaliers were within a last-second shot of victory.

“Every game is different. Every game you have different scoring options and you play to your strengths,” Mozgov said. “I’m ready when they need me.”

Bogut has managed only three points a game in the finals, displaying the skills that pushed the Cavaliers to send two top draft picks to Denver to obtain him for this title push. In return, Mozgov averaged 10.6 points and 6.9 rebounds in 45 regular season games.

“He’s a solid big man in this league,” Bogut said. “He’s just finding an opportunity to play. He wasn’t even getting floor time in Denver, which is a huge headscratcher, but he’s a tough player. He fits a perfect role for them.

“I think their needle changed once they made that trade. Once they got him, they got a rim presence and a big guy that can bang.”

Mozgov likes the physical matchup with Bogut as well.

“He’s a good guy,” Mozgov says of Bogut. “We both like to push each other.”