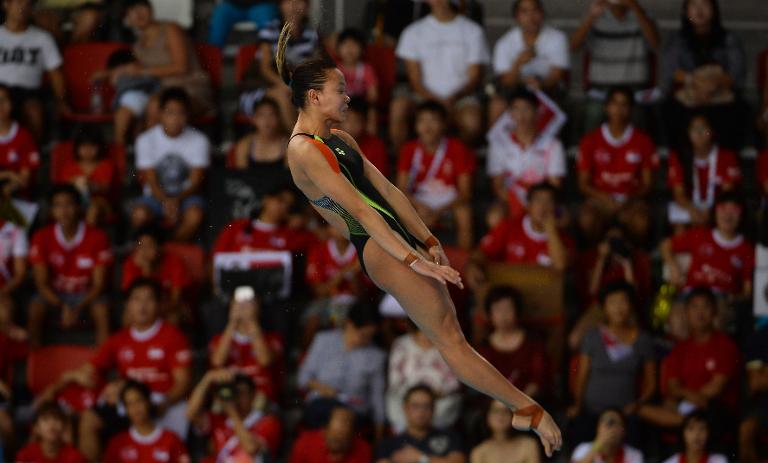 Olympic medallist Pandalela Rinong completed Malaysia’s clean-sweep of all eight SEA Games diving titles on Tuesday, and then said she was preparing something special for next month’s world championships.

The 2012 Olympic bronze medallist was head and shoulders above the competition on the 10m platform in Singapore, scoring 353.00 points with compatriot Loh Zhiayi a distant second on 305.25.

Pandalela, the first Malaysian diver to win an Olympic medal, briefly looked vulnerable after a messy entry on her third dive, with Loh still in close attendance.

But she nailed her third dive — an armstand backwards double somersault with one-and-a-half twists — scoring 78.40 and a drawing a blast of horns and cheers from her Malaysian fans.

She rounded it off with another belter, scoring 81.60 for a backwards, piked, two-and-a-half somersaults with one-and-a-half twists on her fifth and final dive.

With some of her competitors diving from lower platforms, and several landing awkwardly to gasps from the crowd, it was a simple outing for the confident Malaysian.

Pandalela said she was working on a new dive for the worlds, where she will take on the favoured Chinese in an attempt to improve on her haul to date of two bronze medals.

“I feel that they have improved a lot compared to the last few years so I never underestimate them and I still have to do my best,” she said of her competitors from Myanmar, Vietnam, Indonesia, the Philippines and Singapore.

“My target this year is to learn a new dive. I don’t have much time to learn it so I just continue my old routine,” she added.

“But I hope for this world championship I will try to learn a new dive and change it with the back two-and-a-half somersault with pike (her second dive).

“I will try to use it if the new dive is good enough for me.”