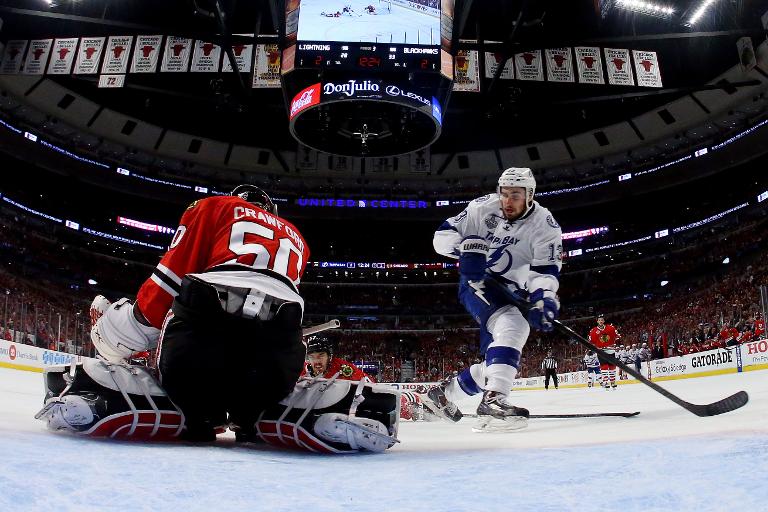 Cedric Paquette scored the go-ahead goal and Ben Bishop made an impressive return to the net as Tampa Bay rallied to beat Chicago 3-2 in game three of the Stanley Cup finals.

Forward Paquette redirected a feed from defenseman Victor Hedman past Chicago Blackhawks goaltender Corey Crawford for the winner with 3:11 remaining in the third period as the Lightning seized a 2-1 lead in the best-of-seven series.

“This was a huge win for us,” Hedman, of Sweden, said. “It swung the momentum back to us and gave us home-ice advantage back.”

Bishop had an impressive performance as he finished with 36 saves on Monday night. Bishop was questionable for the contest after exiting Saturday’s game two late in the third with an undisclosed problem.

Backup goaltender Andrei Vasilevskiy had to enter and finish the game, which the Lightning won 4-3.

Tampa Bay Lightning coach Jon Cooper again declined to reveal the problem that caused American Bishop to leave game two and said he might be willing to discuss it once the series is over.

“We will have to wait for whenever this series ends for that. Sorry, sorry,” Cooper said.

American Ryan Callahan and Czech Ondrej Palat also scored for the Lightning, who are now 8-3 on the road in the National Hockey League postseason.

“It is a tough building to win in but we weathered the storm and Bishop was huge,” said Tampa Bay captain Steven Stamkos.

“We have a lot of confidence in each other and it is amazing to see how guys have stepped up at different times throughout the whole season, not just in the playoffs.”

Brandon Saad and Brad Richards scored for the Blackhawks, who have lost two games in a row for the first time in the 2015 playoffs.

Hedman did most of the work on the winner as he carried the puck into the Blackhawks’ zone then drew both Chicago defensemen, Brent Seabrook and Kyle Cumiskey, to him before finding Paquette open in the slot.

For the second game in a row, a mistake by Chicago forward Patrick Sharp was partly to blame for the game-winning goal. In game two, a bad penalty by Sharp led to a Tampa power play go-ahead goal and on Monday he was too slow in getting back to his own zone which allowed Canadian Paquette to get open for the pass from Hedman.

Goaltender Crawford finished with 29 saves and found himself out of position and unable to slide across the crease to get a piece of Paquette’s puck.

Two goals, one by each team, just 13 seconds apart in the third set the tone in favor of the Lightning.

Saad scored with just over four minutes gone in the third period to put Chicago ahead 2-1 but the Blackhawks lacked the killer instinct to put the game away.

The Lightning answered 13 seconds later at 4:27 when Palat out battled the Chicago defense for a loose puck in the crease and swatted it past Crawford to even the score.

Asked if the Palat goal was the turning point in the game Crawford replied, “You could say that.”

Chicago outshot Tampa 38-32 on the night and controlled the play for much of the game but some sloppy play in their own end hurt them.

The two teams are so evenly matched that Chicago is learning a few mistakes are ending up deciding each game.

“Once we tighten up on certain things in our own end then we can get more offense,” said Chicago defenseman Duncan Keith.

Chicago has also got little offense from Patrick Kane and Jonathan Toews as the dynamic duo have registered just a single point between them in the series so far.

Game four is Wednesday in Chicago.

“We will enjoy this one tonight and then refocus tomorrow for the next game,” said Hedman.