'It is like an emergency has been declared in Delhi' | Newsmobile
Saturday, July 2, 2022 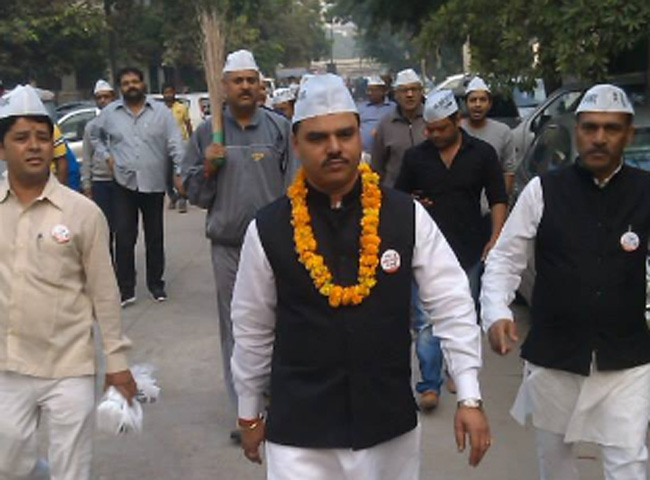 The arrest of 49-year-old Tomar,Â MLAÂ from Trinagar and a first time minister, comes in the midst of a running battle between the AAP government and Lt Governor Najeeb Jung over the powers of the city government, giving it a new political twist.Â

While Delhi Chief Minister Arvind Kejriwal is yet to make an official statement in the matter, senior AAP leader Kumar Vishwas said: “Najeeb Jung is playing a muscle game with us. There is no merit to Tomar’s arrest besides the Centre trying to strong-arm us via the Lt. Governor.”

Police arrested Tomar, who claims a law degree from a University inÂ BiharÂ which his rivals have alleged is fake, from his house and took him to Vasant Vihar police station for questioning.Â

AAP second-in-command and Deputy Chief Minister of Delhi, Manish Sisodia, called for an immediate press conference and lashed out in the manner Tomar was arrested.

“The situation in the State right now is as close to the Emergency as possible. But is this a manner in which a person is detained? Around 30-40 police officers arrived at Tomar’s office and told him that he had to be a part of some questioning and had to present certain documents to the police in the duration of the questoning. The police then asked him to ride till his house for the complete questioning. While he was on his way home, the police asked Tomar to ask his driver to leave the vehicle and let them drive. He was then tricked and taken to the police station. Is this how someone is treated?” Sisodia said while addressing the press conference.

Police sources said he has been arrested in the alleged fake degree case in which an FIR was registered against him last night in Hauz Khas Police Station.Â

A large crowd has accumulated in front of the police station and AAP volunteers are said to be sloganeering at the spot.

Tomar has been accused of cheating, forgery, forgery with purpose of cheating and criminal conspiracy under various sections of IPC.Â

Speaking to a news agency, former IPS officer and social activist Kiran Bedi said, “The police cannot detain him without substantial evidence. That is how the police works and how the arrest is validated. If the police cannot present proof as to why they have arrested Tomar, their case will fall apart. For now, all that Tomar has to do is refute the charges and allegations against him and prove his innocence.”

A police team had gone to Bihar on the direction of High Court to investigate charges that he had obtained a fake degree.Â

Delhi Police Commissioner B S Bassi refused to respond to queries on the arrest.Â

“I was in a meeting and I will seek details of his arrest before commenting,” Bassi said.Â

Soon after the arrest, AAP leaders unleashed an attack on the Modi government against what they claimed was an “illegal and unconstitutional” action against a duly elected MLA and a minister.

However, uneasy alliance partner to AAP, Congress did not come to their rescue, rather questioned the whole incident. “Both Kejriwal and Tomar should resign. What kind of government are they running in the state?” Ajay Maken, senior Congress leader said.

BJP spokesperson Shahnawaz Hussain said: “The law will take its own course in the fake degree case of Delhi Law Minister.”

Jitendra Tomar has moved to the High Court to contest his arrest.

Refuting AAP’S claims, Union Home Minister Rajnath Singh said, “The Home Ministry does not direct the police to arrest anyone.”