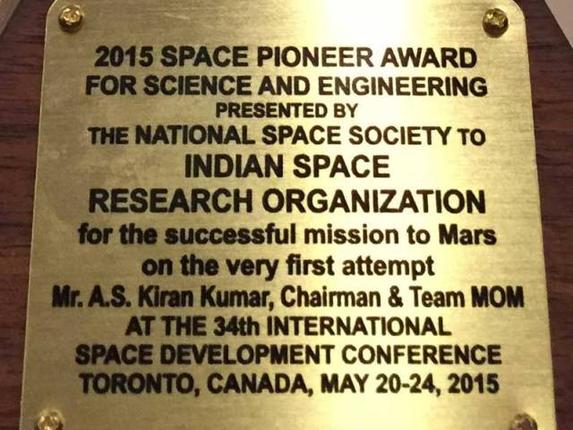 Bengaluru: The countryâ€™s low-cost Mars mission, which is in rendezvous with the red planet for an extended period, has been presented with the space pioneer award for 2015 by the U.S. National Space Society.

Space pioneer award for the year 2015 was presented to Indian Space Research Organisation in the Science and Engineering category during the 34th Annual International Space Development Conference held at Toronto in Canada during May 20-24, 2015, Bengaluru-headquartered ISRO said on its website.

It said the NSS presented the award in recognition of ISROâ€™s efforts in accomplishing the Mars Mission in its very first attempt.

Scripting space history, India on September 24, 2014Â successfully placed its low-cost Mars spacecraft in orbitÂ around the red planet in its very first attempt, breaking into an elite club of three â€” U.S., Russia and Europe â€” who have successfully undertaken missions to Mars or its orbit.

The ISRO spacecraft was launched on its nine-month-long odyssey on a homegrown PSLV rocket from Sriharikota in Andhra Pradesh on November 5, 2013 and had escaped the earthâ€™s gravitational field on December 1.

In 2009, the NSS, an independent non-profit educational membership organisation, dedicated to the creation of a space faring civilisation, presented a similar award to ISRO in recognition of the great accomplishment they have made in the success of the Lunar Probe, Chandrayaan-1.

The award consists of a silvery pewter Moon globe cast by the Baker Art Foundry in Placerville, California, from a sculpture originally created by Don Davis, the well-known space and astronomical artist, ISRO said.

ISRO also said the Mars Orbiter Spacecraft is underÂ â€˜solar conjunctionâ€™Â at Mars, which will extend till July 1, 2015.