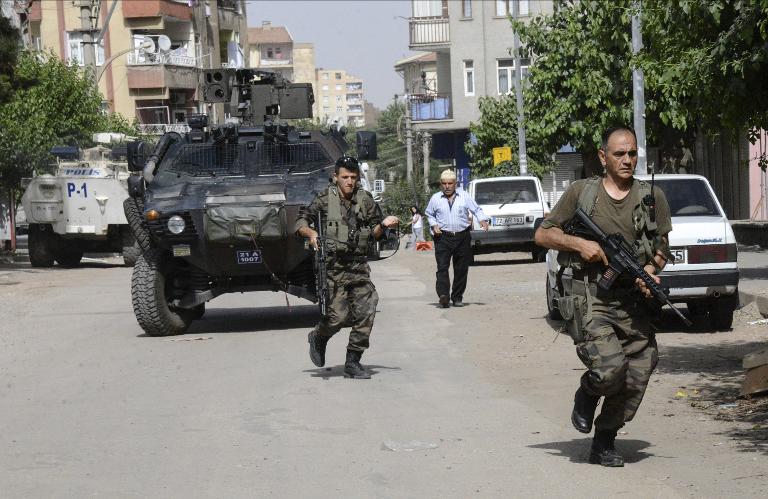 Four people were killed Tuesday, including the leader of an Islamist charity, in clashes between rival Kurdish groups in Diyarbakir, adding to tensions in Turkey’s largest Kurdish-populated city days after legislative elections.

Aytac Baran, the leader of the Ihya-Der charity group, was shot dead by unknown gunmen outside his home in Diyarbakir, prompting a gunfight that left three others dead and four injured, including three journalists, hospital sources told AFP.

Sympathisers of the group fired shots into the air and clashed with supporters of the People’s Democratic Party (HDP) who they claimed were behind the attack, an AFP reporter said.

But the HDP however strongly condemned the attack in a statement, calling for a thorough investigation to arrest the suspects and bring them to justice.

Baran had been threatened by the outlawed Kurdistan Workers’ Party (PKK) just before his assassination, his lawyer said in a statement quoted by the Turkish media.

Turkish media reports said two of the injured journalists were working for the DHA news agency and one for the IHA news agency.

Ihya-Der is linked to Islamist group Huda-Par, known to be the political extension of Turkish Hezbollah, a Kurdish Sunni Islamist militant organisation.

Turkish Hezbollah has no link with the better known Lebanese Shiite group of the same name.

Violence frequently breaks out between Huda-Par and HDP members, who are seen by critics as close to the PKK.

The violence came after three people were killed and dozens more wounded in an attack on an HDP rally in Diyarbakir on Friday, just ahead of the elections.

It also follows a stunning election performance by the HDP, which passed the 10-percent threshold for parliamentary representation to win 80 seats in the 550-member chamber.