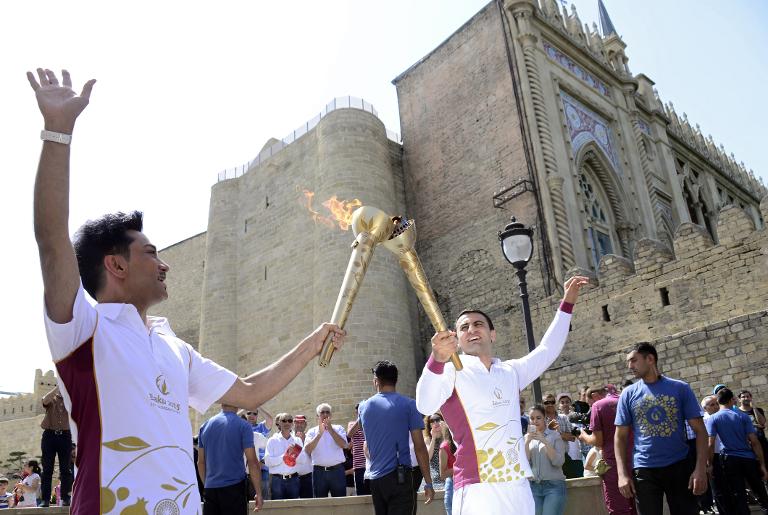 Energy-rich Azerbaijan has pumped vast sums into hosting the European Games in a bid to burnish its image, but under the surface, critics say, is a grim reality of rights violations and repression.

State-of-the-art facilities have shot up in the capital Baku as the ex-Soviet state gears up to host some 6,000 sportspeople from across the continent for the inaugural edition of what is being billed as Europe’s answer to the Olympic Games.

President Ilham Aliyev — who rules the country with an iron fist — is banking on the sporting extravaganza from June 12-28 to help cement Azerbaijan’s place in the European community.

But rights activists in the country hope the glitzy event will focus international attention not on sporting prowess — but Azerbaijan’s record for jailing scores of opponents and cracking down on dissent.

“The European Games could be an excellent opportunity to attract the international community’s attention to the problem of political prisoners in Azerbaijan,” he said.

The sports showcase is not Azerbaijan’s first attempt to put itself on the map by splashing the cash flowing from its vast oil and gas reserves.

In 2012, Azerbaijan hosted the Eurovision Song Contest and Baku has undergone a facelift in recent years that has seen glimmering skyscrapers go up.

Despite two failed attempts the country is also determined to bid for the Olympic Games themselves.

For the European Games, the state has set aside some $1.2 billion (1.06 billion euros) towards infrastructure projects and all the travel and accommodation expenses of the visiting delegations, according to official figures.

“This event is the most significant that has been added to the international sporting calendar in the last 50 years,” British Chief Operating Officer, Simon Clegg, told AFP.

The five venues built for the games -â€“ including a gymnastics arena and a shooting centre â€“- are “among the best in the world,” he said.

In total, some two dozen top-rank facilities have been built or refurbished at a cost expected to exceed the official budget for the event.

But while the machinery has roared day and night on giant construction sites in Baku, Azerbaijan’s beleaguered rights activists and Aliyev’s critics have had their voices drowned out as the government ramped up a crackdown.

Prominent among them is award-winning investigative journalist Khadija Ismayilova, who has been in detention since December on charges she says are designed to silence her.

Speaking over the phone from prison, Ismayilova said the tax evasion charges brought against her were “absurd and totally unfounded”.

“I expect a harsh verdict. They will steal some 10 years of my life, but I am not scared,” she told AFP.

They argue that many in the West are so keen to secure crucial energy supplies from Azerbaijan, in order to bypass Russia, that they are prepared to turn a blind eye to his regime’s excesses.

Human Rights Watch (HRW) has urged European leaders not to send high-level delegations to the opening ceremony of the Games unless the crackdown on dissent ends.

The New York-based rights group accused the authorities of using “bogus charges” to arrest and imprison at least 35 human rights defenders, activists, journalists and bloggers over the past year, prompting dozens to flee the country or go into hiding.

“If the European Games are to show that sport can leave a positive legacy, then every journalist and activist detained on politically motivated charges in Azerbaijan should be released well before the opening ceremony,” said Jane Buchanan, HRW’s associate Europe and Central Asia director.

Aliyev, who took over after the death of his father in 2003, fiercely denies the accusations of rights abuses.

“All fundamental freedoms and rights are fully guaranteed in Azerbaijan,” his top aide, Ali Gasanov, told AFP in a letter, denouncing “political propaganda and the smear campaign waged against Azerbaijan and orchestrated from abroad.”

Amnesty International rights watchdog said that Aliyev’s assurances on freedom of expression, association and assembly “belie the reality of one of the most disastrous years for human rights in Azerbaijan since independence in 1991.”

“No-one should be fooled by the glitz and glamour of the international show Azerbaijan is putting on to portray a squeaky-clean international reputation,” said John Dalhuisen, Amnesty’s Director for Europe and Central Asia.