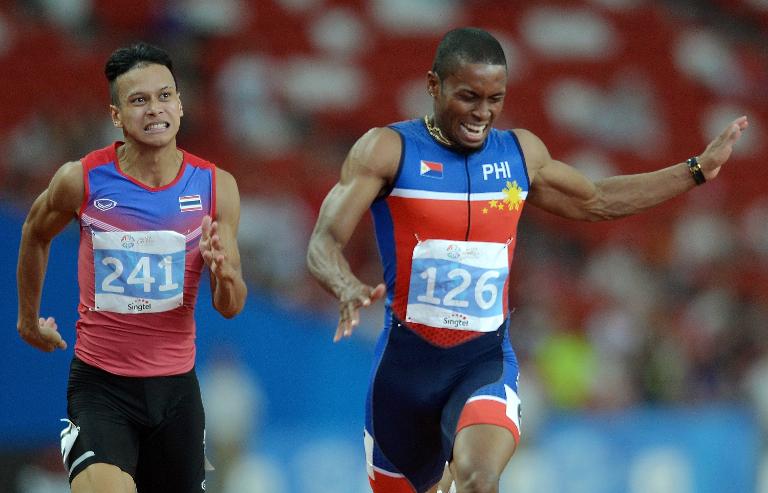 Texas-based Eric Cray swept to 100m victory at the Southeast Asian (SEA) Games on Tuesday as he led a Filipino-American assault on the athletics competition.

Cray, who will represent the Philippines at next year’s Olympics in the 400m hurdles, switched to 100m but easily won with a personal best of 10.25sec.

Cray, 26, dominated the men’s 100m, topping the heats and then winning the final by 0.2sec from Indonesia’s Boby Yaspi, with Thai defending champion Jirapong Meenapra fifth.

Some critics question the Philippines’ policy of recruiting overseas talent with Filipino heritage, but Cray said it was an honour to represent his mother’s country.

“I just feel that if you have Filipino blood and you cherish the traditions of the Philippines, you know itâ€™s a great honour for me to be able to represent and I am just happy that they allow me to,” he told reporters.

“My mother is Filipino and she was born in Olongapo and I was raised there for a little while and then moved to the States.

“So I just enjoy being able to represent my country, my motherâ€™s country, which makes me proud and I hope I can make them proud as well.”

Richardson, who also has a Filipino mother, has only visited the Philippines once on holiday but she also said she was proud to represent her country.

The teenager had an anxious wait while officials examined footage of the 100m finish before awarding her gold, a whisker ahead of Thai runner Tassaporn.

“I am so amazed, this is what I came here to do and I am glad I was able to get it done,” Richardson said.

“Itâ€™s my first time here and I am younger than most of these girls and I am just very proud of myself that I can represent my country.”

She added: “Philippines is coming up, let me just say that.”

Stuart’s 65.63m was more than half-a-metre off his personal best, but still obliterated the 2013 record of 62.23 set by Thailand’s Tantipong Phetchaiya, who took silver with 62.12.

Thai women’s hammer-thrower Mingkamon Koomphon followed Stuart and added yet another Games record when she hurled 56.57m to win gold.