Because everyone loves sleeping in style | Newsmobile
Wednesday, August 10, 2022

Home Lifestyle Because everyone loves sleeping in style 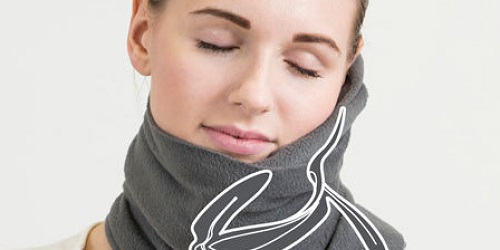 For all those who travel, there might be a long list of gadgets which would help them all along their trip. I bet this one would be of great help.

The Trtl Nap Scarf is an in-flight napping device that actually works by giving your neck a hold and help you fall asleep while you are flying.

Fasten the soft scarf around your neck, the company says, and its sturdy inner arch cradles your head as you sleep, eliminating that annoying rolling-around, falling-down pattern that so often jolts you awake.

The gadget is so handy that you might just fold it up and carry in your handbag, nothing like other cumbersome neck pillows. It retails for about $30 online (Rs. 1800 approx) and ships worldwide.

Thereâ€™s a long list of gadgets similar to the Nap Scarf like the Napwrap which holds your arms together while you nap in your seat and this blow-up scarf offers a chic-looking travel pillow disguised as a fashion statement.

Then there’s the Ostrich Pillow, which is just a ridiculous attempt at turning any and all surfaces into your own personal (and public) bed.

So bring it on a plane, train or car ride, or cart it to the office for a quick pick-me-up nap at your desk.