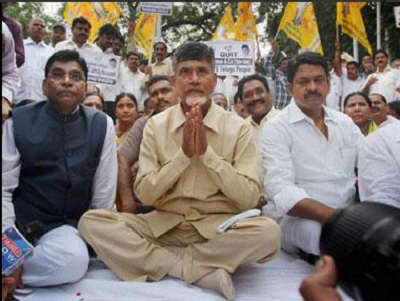 Hyderabad:Â With the Andhra Pradesh government completing a year in power on Monday, aÂ purported conversation in an audio tape between Chief Minister Chandrababu Naidu and nominated MLA Elvys Stephenson has surfaced giving a new twist to the cash-for-votes controversy.

A local news channel in Telangana, TNews, belonging to Chief Minister K Chandrasekhar Rao’s family, has aired an audio recording that they claim is proof that the cash-for-vote case in which a legislator belonging to the Telugu Desam Party or TDP was arrested last Sunday, had the full backing of Naidu, the party president.
Â

Parakala Prabhakar Advisor (Communications) to the Andhra government strongly denied reports saying that the tapes were fabricated and the AP government will take up the issue seriously.

The reported conversation suggested that the Andhra CM was giving “assurance of all sorts” to the MLA if he votes for TDP nominee in the Telangana Legislative Council election.

Prabhakar further alleged that the Telangana Government is trying to malign the image of the AP chief minister by resorting to cheap tactics.

“It is not the chief minister’s conversation. How come they are available outside. Telangana Government has to give answer to this. Telangana CM and Home minister should give answers,” Parakala said.

He said that the Telangana CM is trying to mislead the people of Andhra Pradesh by resorting to “cheap tricks”.

The anti-corruption bureau of Telangana is in the process of questioning TDP MLA Revanth Reddy and two others who have been arrested in cash-for-vote case.

On May 31, the ACB arrested Reddy for allegedly trying to bribe the nominated MLA Elvis Stephenson to vote for TDP nominee in the Telangana Legislative Council election.

Based on a complaint by Stephenson, ACB officials held Revanth, Sebastian Harry and Uday Simha after they were caught while allegedly handing over Rs 50 lakh to Stephenson.

Earlier, Telangana Home Minister alleged that Naidu is the key person in the issue.