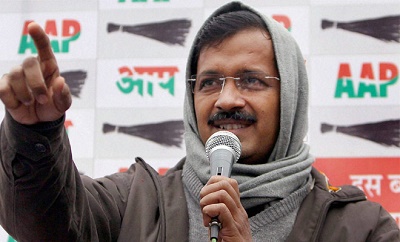 Escalating the bitterness,Â DelhiÂ Chief MinisterÂ ArvindÂ Kejriwal today lambasted the Centre over fund allocation, accusing it of “sucking the blood” of residents of the national capital.Â

Addressing a rally of sanitation workers at the Ramlila Maidan here, Kejriwal assured them of apprising Union Finance MinisterÂ Arun JaitleyÂ of the precarious situation of the civic bodies in terms of funds.Â

He said he will not have any problem if the Union Finance Minister directly grants funds to BJP-ruled municipal corporations.Â

“The people of Delhi give Rs 1,30,000 crore in terms of tax to the central government. Some persons advised me that I should not fight with the Centre, else it would not give funds to Delhi government.Â

“I want to tell you (sanitation workers )that central government does not give funds to us, instead we give funds to the Centre which is sucking the blood of people of Delhi,” he said.Â

Referring to $1 billion Line of Credit to Mongolia announced by Prime Minister Narendra Modi during a visit to the country last month, Kejriwal said, “I hope that even when Prime Minister gave funds to Mongolia, he will also give your salaries when you approach him.Â

“I will seek an appointment with Union minister Arun Jaitley tomorrow and tell him that the people of Delhi are not getting funds,” he said.Â

The Chief Minister’s comments came amid the ongoing strike by the workers to protest “non payment of salary” for the last few months.Â

Reacting to the protests by a section of the workers in front of his residence this morning, Kejriwal said he was “hurt” even as he advised them to demonstrate “outsideÂ BJPÂ headquarters, and residences of Centre and Union ministers”.Â

“I get hurt when you (sanitation workers) stage protest outside my residence despite knowing the fact that there is BJP in the municipal corporations.Â

“Though we give lot of money to Centre in terms of taxes annually but in return we get only Rs 2100 crore. Tell me how do we develop Delhi with this fund. Central government should return at least 50 per cent of what we give to them,” he asked.Â

Kejriwal also requested all municipal councillors of BJP and Congress to meet Modi with him and seek funds for the salaries of employees of municipal corporations.Â

“I want to request all BJP leaders, councillors and all parties to approach our Prime Minister. We will meet our PM led by all three mayors and demand money,” he said.