Here's why you should top your salads with eggs | Newsmobile
Wednesday, June 29, 2022

Home Lifestyle Here's why you should top your salads with eggs 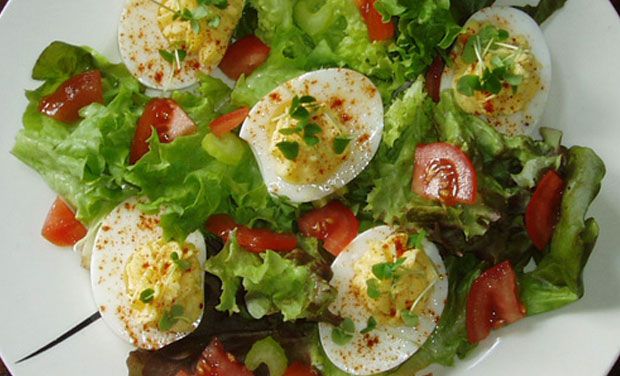 Washington: Next time you visit a salad bar, consider adding cooked eggs to your raw veggies as a new study shows that this combination is an effective method to improve the absorption of carotenoids.

Purdue University’s Wayne Campbell said that Americans under consume vegetables and here they have a way to increase the nutritive value of veggies while also receiving the nutritional benefits of egg yolks.

The study found that those who ate the highest egg amount with the salad of tomatoes, shredded carrots, baby spinach, romaine lettuce, and Chinese wolfberry increased absorption of carotenoids 3-9 fold, which are fat-soluble nutrients that help reduce inflammation and oxidative stress.

The carotenoids found in the salad include beta-carotene, alpha-carotene, lycopene, lutein, and zeaxanthin, the latter two being found in egg yolk as well.

Campbell noted that because of this combination, not only are lutein and zeaxanthin available through whole eggs, but now the value of the vegetables is enhanced.

Campbell believes the beneficial effects seen in this college-age population will extend to all populations and ages. His group would like to expand their research to explore the effects on other fat-soluble nutrients including vitamin E and vitamin D.