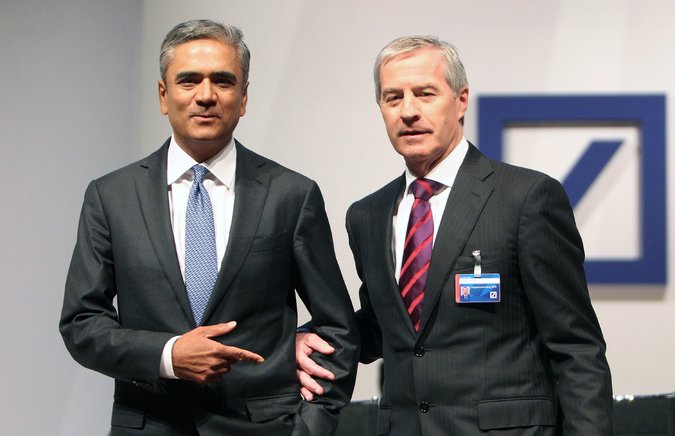 Europe is arguably in the midst of an economic slowdown and caught in the middle of the mess are Europeâ€™s biggest lenders, banks, who have failed to find a tangible solution to the crisis and have been accused of only inflating it further.

To infuse confidence in investors, shareholders and parties with interests in the businesses, banks have been ordering massive restructuring in their middle and upper management. Barclays, Credit Suisse and UBS purged their top ranks to make way for fresh leaders.

Jumping onto the bandwagon is another big player in the financial market, Deutsche Bank, which has appointed John Cryan as their CEO after its co-CEOs Anshu Jain and Juergen Fitschen resigned following criticism from investors.

Deutsche Bank has struggled to restore an image tarnished by a raft of regulatory and legal problems which include probes into alleged manipulation of benchmark interest rates, mis-selling of derivatives, tax evasion and money laundering.

Cryan, 54, has been on the bank’s supervisory board since 2013 and was a former chief financial officer of UBS. He will replace Jain from July 1 and become the sole CEO when Fitschen steps down next year, the bank said.

While Jain had been a part of Deutscheâ€™s Board since 2010 and was brought in to take care of their upstart business and hedge-fund aspect of business, Juergen Fitschen was inducted as co-CEO to take care of the German interests and appease the locals.

However, Fitschenâ€™s inability to drive down an economic policy formulated for the locals and making Jain directly responsible for cutting Deutsche Bank’s costs by 4.7 billion euros ($5.2 billion), selling its Postbank retail business and paring back its investment bank, put huge pressure on the executives.

Fitschen was hired as co-CEO to maintain the bank’s German profile but his ability to sell the group’s strategy to domestic shareholders has been impaired by his own legal problems. He is required to appear every week at a criminal court in Munich to defend himself against allegations that he misled investigators in a dispute with the heirs of the Kirch media empire.

Eric Felder, co-head of securities, was made head of markets, while Joe McGrath, head of global finance, and Richard Taylor, head of investment banking in Europe, the Middle East and Africa, have been made joint heads of global banking.

In March,Â Tidjane Thiam, head of top UK insurer Prudential, was announced to replace Brady Dougan as the CEO of Credit Suisse and was expected to waste little time in building a top team around him when he starts as chief executive ofÂ Credit SuisseÂ at the end of June.
Â
At the same time, UBS AG hired Kevin Lecocq in October last year as its global head of products in asset management, a new position, as Switzerlandâ€™s biggest bank revamped the unit to boost profitability.
Â
This slew of changes which began in October 2014 is the beginning of the end of an era in European economic crisis. Is this a trend? Yes. Will it change Europeâ€™s condition? It is yet to be seen.
Â