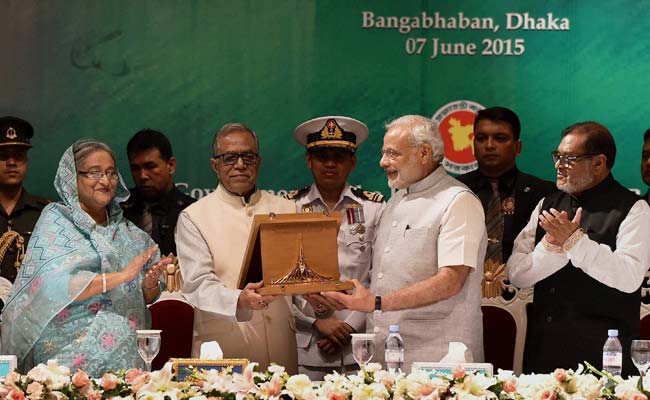 Modi, who received the honour from Bangladesh President Abdul Hamid at Banga Bhaban, called it an “inspiration for so many people”.

“This day is a matter of pride for the people of India… If Atalji’s health permitted and he was present here, this occasion would be very different,â€ he said.

The Prime Minister, who described his visit to Bangladesh as “historic”, will address the Indian community later on Sunday evening at the Bangabandhu International Conference Centre before leaving for New Delhi.

Earlier in the morning, Modi offered prayers at the famous 12th-Century Dhakeshwari temple in Dhaka, the most revered place for Hindus in Bangladesh. He spent around 15 minutes at the temple, which was closed for the public at the time.

Modi then visited the newly-constructed Indian High Commission’s chancery at Baridhara, where he also inaugurated six projects undertaken with grant-in-aid from India.

On Saturday, India and Bangladesh ratified the historic Land Boundary Agreement which will simplify their 4,000-km border and clarify the identities of 52,000 people living in the enclaves. The deal was signed in the presence of PM Modi and his Bangladeshi counterpart Sheikh Hasina in Dhaka.

Modi also signed 22 agreements aimed at boosting trade and transport links with Bangladesh. These include deals on the movement of goods across borders and rail projects.

He also announced a fresh $2 billion line of credit for Bangladesh and promised quick implementation of the earlier line of credit of $800 million and full disbursement of $200 million.