Home Politics Land deal is like fall of Berlin wall: Modi in Dhaka 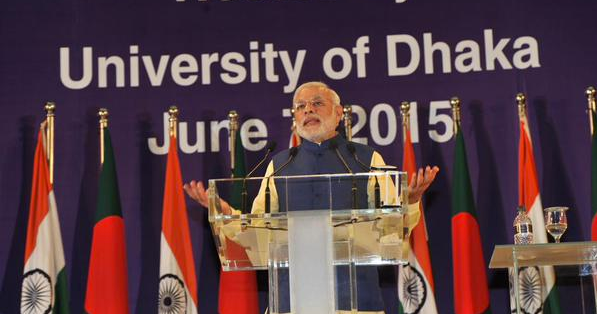 Dhaka: Indian Prime Minister Narendra Modi on Sunday termedÂ ratification of the land boundary agreement between Bangladesh and India moreÂ â€œno less significant than the fall of the Berlin Wallâ€.Â

â€œIf you think Land Boundary Agreement is about land going this side and that sideÂ then thinks again. It is a meeting of hearts,â€ the Indian premier said in his addressÂ to civil society members while wrapping up his two-day visit to Bangladesh thisÂ evening.

â€œEarlier we were only near to each other, but now we are also together in ourÂ efforts,â€ he told a large attentive crowd.

Touching different stages of India-Bangladesh relations, he said: â€œMostÂ importantly, we successfully overcame long pending issues of the past and this willÂ enable us to create a better future for our ties.â€

Dhaka University organized the programme at the Bangabandhu InternationalÂ Conference Centre in Dhaka.

Talking on the much-awaited Teesta River water sharing deal, the BJP leader saidÂ water issues need to be resolved from humanitarian perspective. â€œI am confidentÂ we will be able to do so.â€

Bangladesh, like India is a youthful nation, he said, adding: â€œI am sure theÂ development journey of Bangladesh cannot stop now.â€

Referring to Indiaâ€™s role in Bangladeshâ€™s 1971 War of Independence, he said,Â â€œWhen we think of Bangladesh we feel very proud of the fact that even our JawansÂ have given their blood for this nation.Â We want to progress by pooling the talents of both the countries.â€

All the 22 agreements signed between Bangladesh and India yesterday have theÂ potential to transform the two countriesâ€™ bilateral ties, he said.

Emphasizing the importance of connectivity for the South Asian Association forÂ Regional Cooperation (SAARC), he said, â€œIf some don’t agree then we will moveÂ forward with those that do.â€

Bangladesh, Bhutan, India and Nepal have placed their priority on easyÂ connectivity. This was a proposal even raised in SAARC Summit, Modi said.

Talking on terrorism, he said: â€œTourism unites the world while terrorism dividesÂ the world. Let’s promote tourism.Â Terrorism respects no borders. I was very happy to hear Sheikh Hasina sayÂ Bangladesh has zero tolerance for terrorism.â€

“The world now does not need vistaarvaad (expansionism), it needs vikasvaadÂ (development),” he added.

Talking on the role of United Nations, Modi opined, â€œThe UN is stillÂ stuck in the previous century. It needs to reform.â€

A nation which represents one-sixth of humanity and has contributed so much toÂ international peace and security deserves a place in the United National SecurityÂ Council, he said.

The Indian PM expressed delight in the fact the former PM Vajpayee has beenÂ honoured by a top honour in Bangladesh and added that receiving the award from aÂ person associated with the freedom struggle and in the presence of the daughter ofÂ Bangabandhu made this even more special.

â€œThank you Bangladesh. The visit will remain forever etched in my memory.Â Outcomes of the visit will lead to a stronger partnership,â€ he said.