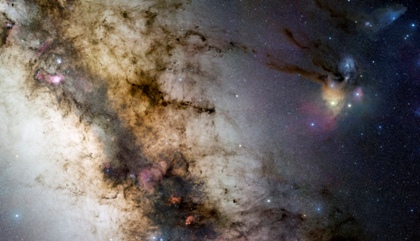 Washington: A team of researchers has now developed a new method to give our Milky Way a more precise physical checkup, giving an idea of how much it may staggeringly weigh.

The Milky Way consists of roughly 100 billion stars that form a huge stellar disk with a diameter of 100-200 thousand light years and the Sun is part of this structure.

The team of scientists led by Columbia University researcher Andreas Kupper used stars outside this disk, which orbit around the Milky Way in a stream-like structure, to weigh the Milky Way to high precision.

The team demonstrates that such streams, produced by dissolving globular clusters, can be used to measure not only the weight of our Galaxy, but can also be exploited as yardsticks to determine the location of the Sun within the Milky Way.

Globular clusters are compact groups of thousands to several millions of stars that were born together when the universe was still very young, said Kupper. They orbit around the Milky Way and slowly disintegrate over the course of billions of years, leaving a unique trace behind. Such star streams stick out from the rest of the stars in the sky as they are dense and coherent, much like contrails from airplanes easily stick out from regular clouds.

From the models and from comparing the wiggle pattern of the models to the observations, they were able to infer the mass of the Milky Way within a radius of 60,000 light years to be 210 billion times the mass of the Sun with an uncertainty of only 20 percent. The unique pattern of the density wiggles helped significantly to rule out models of the Milky Way, which were either too heavy or too skinny.

An important advance in this work was using robust statistical tools, the same ones used to study changes in the genome and employed by internet search engines to rank websites, explained coauthor Ana Bonaca, adding that this rigorous approach helped in achieving the high precision inÂ weighing theÂ Milky Way.