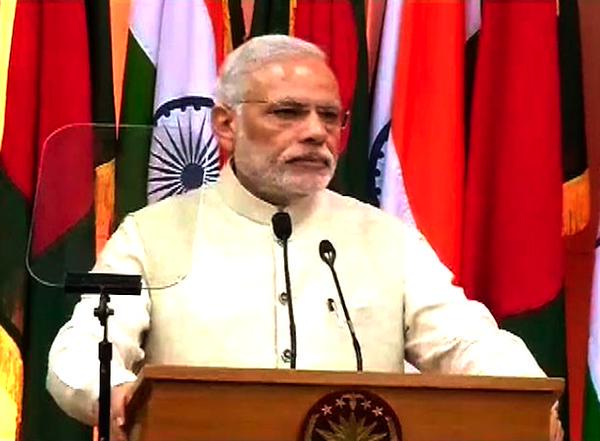 Dhaka:Â After signing the crucial Land Boundary Agreement with Bangladesh, Prime Minister Narendra Modi is all set to address Indian and Bangladeshi citizens on the day two of his visit to the neighbouring country.

The two countries inked as many as 22 agreements, including on curbing human trafficking, smuggling of fake currency and setting up an Indian Economic Zone, to boost bilateral ties.

Agreements on two key bus services were also reached, including the Kolkata-Dhaka-Agartala route that will benefit the commuters by reducing travel time by nearly one-third. Another Dhaka-Shillong-Guwahati route was also flagged
off by the three leaders.

Memorandums of Understanding (MoUs) on Prevention of Human Trafficking; Prevention of Smuggling and Circulation of Fake Currency notes; and setting up an Indian Economic Zone were also reached by the two sides.

In another key development, a Memorandum of Understanding for Extending a New Line of Credit (LoC) of $2 billion by India to Bangladesh was signed.

A renewed Protocol on Inland Water Transit and Trade besides an Agreement on Coastal Shipping between Bangladesh and India were among the other deals reached.