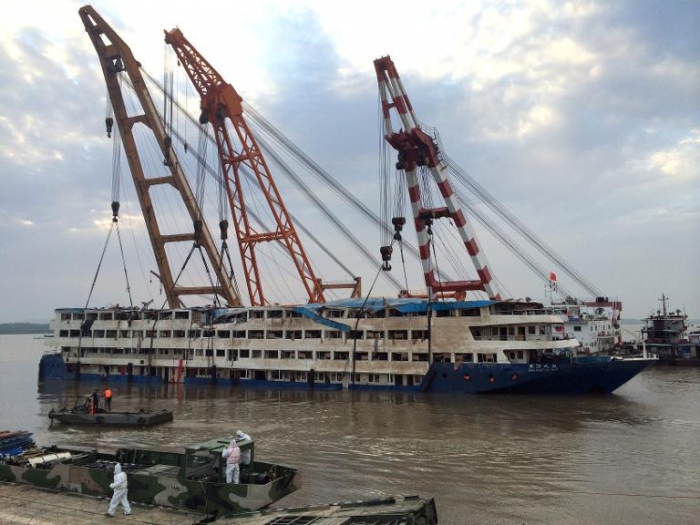 A total of 331 people have been confirmed dead from a cruise ship that capsized in central China after rescuers lifted the vessel out of the water, state-media said Saturday.

Just 14 people have been confirmed alive out of the 456 — mostly tourists aged over 60 — on board when the “Eastern Star” rapidly sunk on the Yangtze river in a storm on Monday.

Authorities gave the death toll of 331 as of 08:00 am (0000 GMT) Saturday, the state-run Xinhua news agency said, in what looks likely to be China’s worst shipping disaster in nearly 70 years.

State-broadcaster CCTV had said the confirmed death toll at 2:30 am was 154, suggesting that more than 150 bodies were discovered overnight after the ship was raised from the water.

As images showed the battered blue and white vessel, a CCTV reporter at the scene said the rescuers’ torches were visible inside the ship overnight.

Efforts Saturday will focus on the upper-level of the ship, which partly collapsed. “Reaching the top floor has been an arduous task,” the reporter said.

Images showed workers in white suits apparently adapted for handling bodies walking on a floating platform next to the Eastern Star.

Xinhua initially gave the total of confirmed dead as 345, but then revised it down to 331. An official said on Thursday that no new survivors are expected to be found.

Rescuers used massive cranes Thursday night to right the ship at the site of the disaster in Hubei province’s Jianli county, after a Chinese transport ministry spokesman said there was “no possibility of survival,” for those left missing.

The cranes began lifting the ship from the site of its capsize on Friday, completing the task within hours.

Reports citing witnesses said the 76.5 metre long (250 feet) and 2,200 tonne ship overturned in under a minute, and weather officials said a freak tornado hit the area at the time.

The vessel was cited for safety infractions two years ago, according to a notice by the Nanjing Maritime Bureau, but no further details have been given about the state of the ship.

Investigators will probe the ship’s structure for flaws, CCTV said, after the ruling Communist party’s all-powerful Politburo Standing Committee vowed to leave “no doubts remaining,” about the disaster.

Information about the sinking and media access to the site have been tightly controlled, and any online criticism of the search operation quickly doused.

Relatives of those on board clashed with police earlier this week, and angry scenes occurred at an official press conference in Jianli on Friday.

“What we have received are words, selected wisely, which are full of untruths,” an elderly relative who sneaked into the briefing told reporters, before officials escorted her away.

A petition posted by family members on social media service WeChat called for “key state leaders” to apologise and an investigation into the shipping company and compensation.

It also demanded a “death sentence” for the ship’s captain, one of the few survivors of the disaster, who is in police custody.

The state-run China Daily on Friday identified him as 52-year-old Zhang Shunwen, who it said has 35 years of experience and was rescued two hours after the accident by a patrol ship.

Local reports said other ships in the vicinity had dropped anchor after a warning of heavy storms, but the Eastern Star continued on.

Rescuers decided to overturn the ship “on the general judgement that there is no possibility of survival,” Xu Chengguang, a transport ministry spokesman, told a press conference late on Thursday.

Among the rescue effort were more than 3,400 soldiers and 1,700 paramilitary police and 149 vessels, Xinhua said.