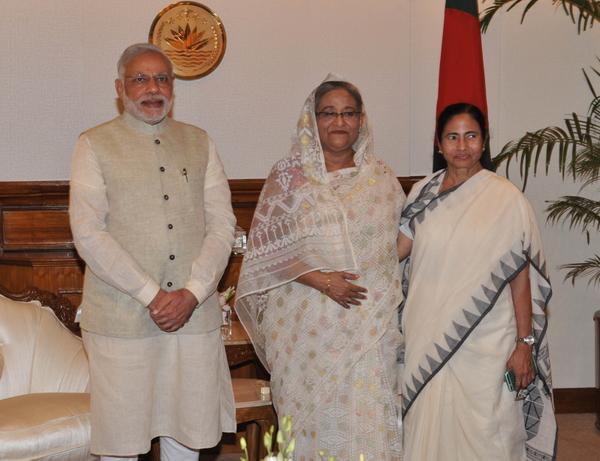 New Delhi: In what is part of an active Neighbourhood outreach, Prime Minister Narendra Modi is in Bangladesh in a visit aimed at strengthening strategic ties and for thanking the Sheikh Hasina government for being a friend of India. In geopolitics strategic friends in the neighborhood matter immensely, and a favorable regime in Dhaka is important for India’s security interests. For Hasina too,having Modi as a dependable ally brings enormous economic dividends.

Modi ushered in a fresh chapter for bilateral relationship by inking a land boundary agreement, that will ensure that nationals of 111 Indian enclaves in Bangladeshi territory and 51 Bangladeshi enclaves in Indian territories finally get a home land.

Indiaâ€™s relations with Bangladesh have certainly witnessed a significant upswing over the past decade. Bilateral trade has risen to $7 million and it is expected a $3 billion investment in a new power plant in Bangladesh by Reliance Industries and a credit line by the Indian government will provide a fresh impetus to the ties.

Bangladeshi Prime Minister Sheikh Hasina has been cracking down on hardline elements since she came to power and India has provided support to Hasina to ensure that Bangladesh stays out of the grip of fundamentalists. An important element of this trip is that Modi is accompanied by mercurial West Bengal Chief Minister Mamata Banerjee, which is also reflective of aÂ bipartisan foreign policy for Bangladesh in India.

The main items on the talks menu are the signing of the land boundary agreement, and enhancing connectivity and business links â€“ an issue that has been a priority for Modi. Modi is likely to flag off the Kolkata-Dhaka-Agartala bus service â€“ other bus services like Dhaka-Guwahati may be announced during the visit.

India is also expected to agree to Dhakaâ€™s request of increase the line of credit for projects aimed at enhancing regional connectivity, from $1.5 billion to $2 billion. India has just finished disbursing grants of $200 million to Bangladesh, as decided previously by the Manmohan Singh led UPA government. In addition, Modi may announce a visa-on-arrival program for Bangladeshi tourists who travel by air.Â  Modi will also provide greater focus on security partnership between Delhi and Dhaka which has led to a crack down on many North Eastern militant groups and cells of ISI who were using Bangaldesh as a haven to mount terror strikes in India.

The India-Bangladesh relationship does carry strong historical and cultural overtones, but both sides also realize the immense economic benefits of a strong relationship.Â

Bangladesh is also home to an aspirational middle class that would like to reap the dividends of a better relationship with New Delhi. Over the past decade the country has enjoyed steady economic growth, at an average annual clip of around 6%. This growth has of course benefited from international assistance and external factors, but it also owes to progressive policies and a vibrant civil society, as well as strong intellectual capital.

The other point that will strengthen the relationship is the fact that both countries are keen to enhance connectivity not just between them, but also with other countries in South Asia. The BBIN (Bangladesh, Bhutan, India and Bhutan) corridor will be high on the agenda during the Modi visit which also provides an added incentive to Bhutan and Bangladesh both close friends of India. Apart from the SAARC region, Bangladesh is an important partner for Indiaâ€™s Act East Policy, and there have even been some proposals of a strong trilateral between India-Bangladesh and Myanmar, such as a gas pipeline (although the current security situation may not permit it). Both countries are also part of a number of groupings that seek to expand South Asiaâ€™s connectivity with Southeast Asia and China; these include the Mekong Ganga Cooperation Initiative, BIMSTEC, and the BCIM (Bangladesh-China-India-Myanmar) economic corridor project. Â Â

Modi has exhibited an ability to be unconventional and quite innovative. What the bilateral relationship between the countries needs right now is for looking at the relationship beyond simply a bilateral perspective, or even through a SAARC lens.

It is time that Northeast India and Bangladesh built not only strong economic links, but also greater cultural and educational ties. Apart from more border haats, something border states have already called for, the two sides should explore the possibility of sister city arrangements to promote more people-to-people interactions.

India and Bangladesh share much in common, beyond culture. They represent one of the most important relationships in South Asia and, for India, a vital pivot in its Act East Policy.