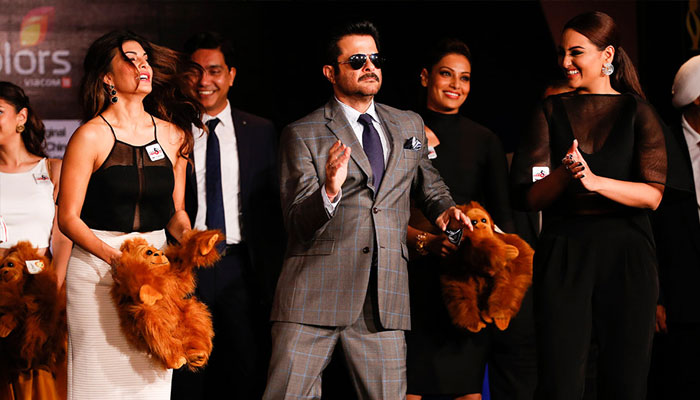 The 16th edition of the International Indian Film Academy awards kick startedÂ on FridayÂ with a lot of glitz and glamour.

The event was followed by a music extravaganza night IIFA Rocks, co-hosted by Parineeti Chopra and Ayushmann Khurrana. He also entertained the audience with his magical voice and sung few lines from his famous song, â€™Pani Da Rangâ€™.

Sonakshi Sinha also wooed everyone with her voice at IIFA Rocks. She will also be performing on the final day, i.e onÂ June 7.

The IIFA Weekend this year will also see a night exclusively dedicated to fashion which will be hosted by Neha Dhupia and IIFA Rocks, the exclusive music extravaganza will see a host of fantastic musical performances by Shankar-Ehsaan-Loy, Mika, Ankit Tiwari, Kanika Kapoor, Jawed Ali and the Nooran sisters.

Greek God of Indian Cinema, Hrithik Roshan also gathered a huge crowd during his stage performance at IIFA Weekend. The actor performed live on some of his superhit songs and posed for selfies with his fan in the Pavilion Mall in Malaysia.

As for a big surprise, IIFA Weekend had the lookalike of the King Khan. SRKâ€™s lookalike was moreover a centre of attraction for the people of Kuala Lumpur. He sat outside the venue JW Marriott in a minivan and posed with children and people for selfies.

Later the actor also unveiled his sister Sunaina Roshanâ€™s book,â€™To Dad with Loveâ€™, based on their star father Rakesh Roshanâ€™s journey so far in the industry.

On Saturday, the IIFA gala screening will feature the highly awaited and star-studded film ‘Dil Dhadakne Do,’ exclusively at the green carpet.

Established in 2000, IIFA Awards were initiated with the aim of celebrating Indian cinema across the world.

The event will be telecast on India’s leading Hindi entertainment channel Colors with foot prints in over 140 countries.