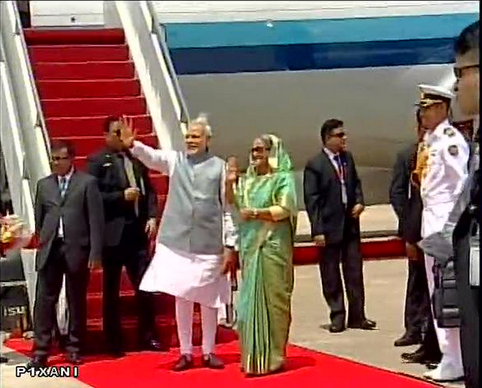 Dhaka: Indian Prime Minister Narendra Modi on Saturday arrived in Bangladesh on his two-day visit, which is expected to inject a new momentum in bilateral ties as both countries will be ratifying the long-pending ‘Land Boundary Agreement’ besides firming up a number of key pacts.

During the two-day visit which is part of his policy to deepen engagement with India’s immediate neighbourhood, Modi will hold wide-ranging talks with his Bangladeshi counterpart Sheikh Hasina on the whole gamut of ties and ways to move forward further.

â€œImpressive thing about PM Modi is that he has an outstanding reputation as a â€˜doerâ€™ in the international scene. PM Modi is able to separate national politics from national interest,â€ Gowher Rizvi added.

Rizvi expressed hope that the agreement on Teesta water sharing deal will be signed â€œsooner than laterâ€. He also stated that Bangladesh has taken sternest possible action to end cross border movement and all forms of terrorism.â€

Modi was received at the Dhaka airport by his Bangladeshi counterpart Sheikh Hasina. A 19-gun salute was also given to PM Modi at the airport.

Ahead of Modi’s visit, Dhaka is having a festive look with streets adorned with life-size cutouts of Modi, West Bengal Chief Minister Mamata Banerjee and Bangladeshi Prime Minister Sheikh Hasina.

Large cutouts of Bangladesh founder Sheikh Mujibur Rehman and former Indian Prime Minister Indira Gandhi were also seen on the streets as a token of an age old relationship between both the two countries and India’s role in the Bangladesh Liberation War in 1971.

In Dhaka, Modi is expected to send a strong message to strengthen the hand of his Bangladeshi counterpart who has been steadfastly helping India in curbing various North East militant groups which used to take refuge in that country besides coming down hard on radical Islamist outfits.

Ahead of the visit, Modi had lauded Hasina for playing an “important role” in making the bilateral ties “strong” and said, “I am certain my visit will be beneficial for the people of both our nations and in the larger good of the South Asian neighbourhood.”

Bangladesh and India share a 4096-km-long border, most of which is porous, and both the countries are likely to try and find ways to enhance security cooperation, particularly to further contain northeast insurgent groups.

Ratification of the Land Boundary Agreement will be a major highlight of Modi’s visit to Dhaka.

Foreign Secretary S Jaishankar on Friday described Modi’s visit to Dhaka as “very historic” while terming conclusion of the LBA as a major achievement.

Enhancing rail, road and water connectivity and boosting economic engagement will find priority and a number of pacts are likely to be signed in these areas. A pact to supply diesel to Bangladesh has also been finalised and would be inked.