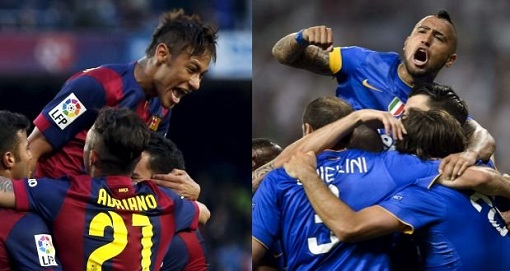 Factfile on Juventus and Barcelona ahead of Saturday’s Champions League final at Berlin’s Olympic Stadium:

Form: Barcelona coach Luis Enrique is bidding to emulate Pep Guardiola by winning only the second treble of Champions League, La Liga and Copa del Rey in the club’s history, following their 2009 feat.

The Catalans won the Spanish title by two points from Real Madrid and beat Athletic Bilbao in the Copa del Rey final, and their South American strike-force of Lionel Messi, Neymar and Luis Suarez are in top form with 120 goals between them.

In comparison, the entire Juventus team has managed 103 goals, but Argentina’s Carlos Tevez has formed an impressive partnership with ex-Real forward Alvaro Morata to help take The Old Lady of Turin to the brink of their first treble.

Massimiliano Allegri’s won the Serie A title by 17 points and, with the Coppa Italia already secured, the Champions League title would be the icing on what has already been a very impressive season.

Leading scorers in all competitions:

Barcelona – Barca earned their 23rd Spanish league title by finishing just ahead of Real Madrid in the table.

Juventus – Won Serie A for the 31st time with a 17-point margin from runners-up Roma.

Dispatched Bayern Munich 5-3 on aggregate in the semi-finals after a devastating 3-0 victory in the first leg at the Camp Nou.

Juventus – Runners-up in Group A behind Atletico Madrid. Beat Borussia Dortmund 5-1 on aggregate in the last 16 and Monaco 1-0 in the quarter-finals before beating Real Madrid 3-2 in the semis to knock out the holders.