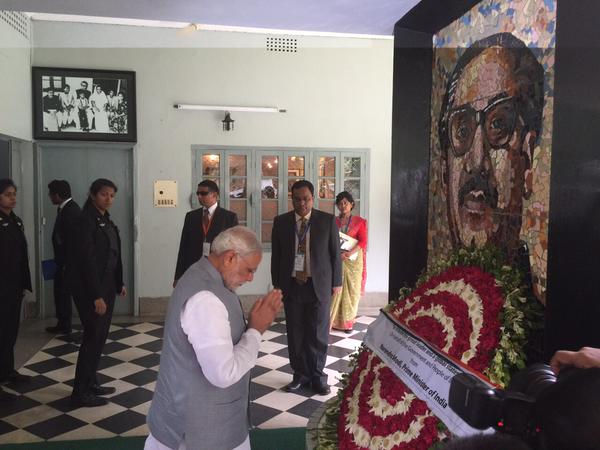 Dhaka: A red carpet was rolled out for Indian Prime Minister Narendra Modi who arrived in Dhaka on a two-day state visit, his first to Bangladesh after becoming PM.

Bangladesh Prime Minister Sheikh Hasina welcomed him near the VVIP Tarmac of the Hazrat Shahjalal International Airport after the special air force flight â€˜Rajdootâ€™ touched down at 10:08am on Saturday.

A child presented him a bouquet post which he, accompanied by Bangladesh Prime MInister Sheikh Hasina proceeded towards the makeshift “SalutingÂ  Dais”.

A contingent from Bangladesh Army, Navy and Air Force gave a guard of honour and state salute to Modi.

“Leaving for Bangladesh. This visit is going to strengthen the bond between our nations, benefitting people of our countries and our region,” Modi tweeted before leaving for Dhaka.

Indiaâ€™s Foreign Secretary S Jaishankar has termed the visit â€˜historicâ€™ and said it will â€˜completely settle boundary with Bangladeshâ€™.

â€œWe have solved many issues and our relations have reached to a historic height,â€ Bangladesh Foreign Minister AH Mahmood Ali said.

Indian Prime Minister Narendra Modi paid respects to the martyrs of Bangladeshâ€™s Liberation War against Pakistan after he arrived in Dhaka on a two-day state visit.

He then signed the visitors book and planted a â€˜Uday Padmaâ€™ at the sapling point of the memorial. Later he visited Bangabandhu Memorial Museum at Dhanmondi 32 to pay homage to the Father of the Nation Sheikh Mujibur Rahman.

Modi’s delegation will stay at Pan Pacific Sonargoan Dhaka Hotel during the visit.

West Bengal Chief Minister Mamata Banerjee, who came on Friday night, will meet him at the hotel at about 3:15pm.

Modi will then leave for the Prime Ministerâ€™s Office for discussions with Hasina at about 4:15pm.

Both leaders will witness the exchange of instrument of ratification of Land Boundary Agreement, and signing of MoUs, agreements and exchanges of different documents.

Hasina will host a dinner on Saturday night at the hotel.

On Sunday morning, the Indian leader will begin the day with prayers at Dhakeshwari National Temple at 8:45am. Then he will visit the Ramkrishna Mission Moth.

Then he will go back to his hotel before leaving for Bangabhaban to meet President Md Abdul Hamid. He will receive the Award of Liberation War Honour on behalf of former Indian Prime Minister Atal Bihari Vajpayee and attend a private lunch hosted by the president.

Leader of the Opposition Raushon Ershad will call on him at his hotel suite at about 3:10pm, before he delivers a public speech at Bangabandhu International Conference Centre at 6:30pm.

However, BNP Chairperson and former Prime Minister Khaleda Zia will also call on Modi before his public speech.

But the meetings have not yet been included in his official itinerary.

He has a free slot between 3:30pm and 6:20pm, according to the tentative schedule.

He will leave Dhaka at about 8:10pm on Sunday and will be seen off by Prime Minister Hasina at the VVIP Tarmac.

Modi earlier said his visit would focus on trade and connectivity and be beneficial for the people of the both countries.

â€œHello Bangladesh. I bring with me the affection & goodwill of the people of India,â€ this is what Modi tweeted shortly after landing at Hazrat Shahjalal International Airport.

Hello Bangladesh. I bring with me the affection & goodwill of the people of India.

And he is tweeting in Bangla first and then in English.Â

Thank you PM Sheikh Hasina for the warm welcome. I look forward to a very good visit that will strengthen ties between India & Bangladesh.

Two minutes after tweeting this, he posted another tweet: â€œThank you PM Sheikh Hasina for the warm welcome. I look forward to a very good visit that will strengthen ties between India & Bangladesh.