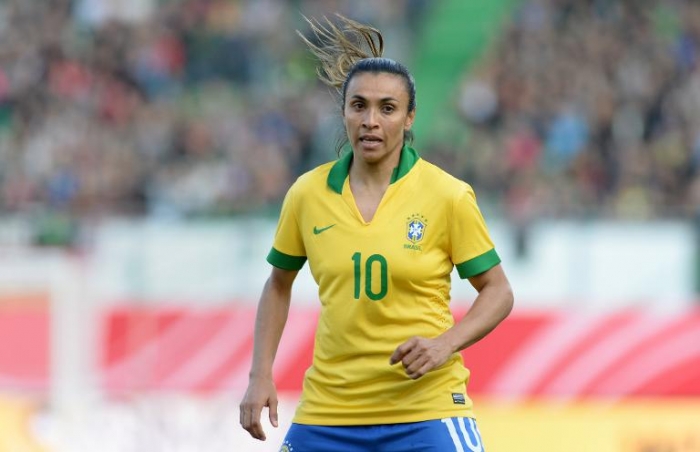 Ten players to watch at the FIFA Women’s World Cup from June 6 to July 5:

While few footballers in the women’s game are household names, Marta — full-name Marta Vieira da Silva — is a celebrity in her native Brazil.

Discovered playing street football against boys as a 14-year-old, her obvious talent took her from the humble city of Dois Riachos to top US teams including Los Angeles Sol and Western New York Flash.

Now playing with Swedish club FC Rosengard her performances helped Brazil to silver at the 2004 and 2008 Olympics and she won the first of her five World Player of the Year awards in 2006.

The number 10 is just 5ft 4in tall (1.63m), but with perfect balance, she can split defences with her dribbling. She has never won the world title, losing the 2007 final to Germany.

INAC Kobe Leonessa attacking midfielder will be making a record sixth appearance in a World Cup, the most ever for any player, male or female.

The veteran made her debut with the ‘Nadeshiko’ in December 1993 at only 15, and the highlight of her career was as captain when Japan won their first world title after a dramatic penalty shootout against the United States in 2011. She was awarded the FIFA World Player of the Year award as a result.

The veteran, who has 198 caps and scored 83 goals internationally, had been left off the squad recently, but head coach Norio Sasaki expects Sawa to play a leading role for the team both on and off the field in Canada.

Canada captain Sinclair is one of the most prolific scorers of all time since joining the national team in 2000, ensuring her place in history as the top scorer at the 2012 Olympics. The Portland Thorns player scored a hat-trick in a semi-final and lead her country to their first Olympic soccer podium with bronze, carrying the Canadian flag at the closing ceremony as a result. Capped 222 times with 153 goals she has been a nominee for World Player of the Year six times between 2005 and 2012, but has never won the award.

The USA have failed to achieve World Cup success since 1999, but Morgan is part of an experienced squad bidding to win a third global title.

The Portland Thorns forward made her first appearance for the Stars and Stripes’ full senior side in March 2010 and was the youngest member of the US team at the 2011 World Cup.

In the space of five years she has become a key member of the US team, with 84 caps and 51 goals.

Oshoala is a rising star of the women’s game and at 20 years will compete in her first senior World Cup in Canada.

From a Muslim family she dropped out of school to follow her footballing career, and joined Liverpool in January this year.

She has been likened to former AC Milan star Clarance Seedorf for her scoring ability, pace, and stamina, and is dubbed ‘Superzee’ by her teammates.

Oshoala has become the Falcons’ main star after being named the best player at the African Women’s Championship. She was also the top scorer of the 2014 FIFA under-20 Women’s World Cup in Canada on their way to the final.

Fara Williams is now the most capped footballer in English history, man or woman with an impressive 139 international appearances.

A difficult upbringing meant that Williams was homeless for six years earlier in her career. She now volunteers for charities helping the homeless.

Nowadays the midfielder is a leader for both international team and club side with back-to-back WSL League Titles with Liverpool.

It is her third World Cup but despite playing in all England’s 2007 group games, she was suspended for their quarter-final defeat to the USA. She was her country’s top scorer in their 2011 qualification campaign and scored in their opening game against Mexico.

Miedema made her senior international debut aged 17 and scored a hat-trick in only her second appearance, despite only coming on as a 75th minute substitute against Portugal.

Clinical on front of goal her ability to play off either foot helped her find the target 16 times during qualification for the World Cup, scoring all their goals in a 3-2 aggregate play-off win over Italy.

At 18 years and dubbed the ‘Arjen Robben of the women’s game’ she plays professionally for Bayern Munich. “Everyone is looking at Miedema. She’s a great player and young talent,” admitted coach Roger Reijners.

Angerer has won two World Cups in 2003 and 2007 with Germany and is the most decorated goalkeeper in the women’s game. Germany’s captain, she went through the entire tournament in China in 2007 without conceding a goal. Her record of 540 minutes without letting a goal into the net remains a record at a World Cup finals. The holder of 138 caps, this is Angerer’s last World Cup and she will also retire from her club Portland Thorns later this year. She won the 2013 world player of the year award, becoming the first goalkeeper to earn that distinction.

Defender Georges is the most experienced player in the France team with 158 caps, and will compete in her fourth World Cup. Born near Versailles to parents from the French Island of Guadeloupe she started her footballing career at the age of 12 with French club Paris Saint-Germain. She left the club in 2004 for Boston College Eagles, returning to France and Lyon in 2007 before going back to Paris Saint-Germain in 2013. A six-time French league winner she played in the Champions League final this year which Paris Saint-Germain lost to German side Wolfsburg. France, ranked third in the world, are among the favourites for this year’s tournament in Canada.

Rincon, 21, was named best player of the Copa America tournament as she helped Colombia qualify for their first Women’s World Cup, along with the 2016 Olympics.

The attacking midfielder scored five goals in the tournament, where Colombia finished second to Brazil.

Rincon now plays professional soccer in Italy, after a stint with the New Jersey Wildcats. She has also represented her country at the 2008 FIFA Under-17 World Cup and 2010 FIFA Under-20 World Cup.