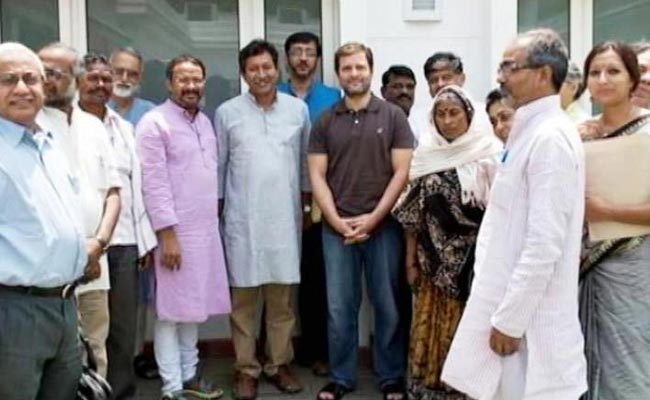 Congress Vice President Rahul Gandhi met with members of civil society including Greenpeace activist Priya Pillai, who had a running feud with the NDA government dispensation and expressed solidarity with their struggle.

â€œA wide cross-section of Civil Society Leaders met Rahul Gandhi on the issue of BJP Govt’s continuing attack on Freedom of Speech & Dissent,” the twitter handle of Rahul’s office said after the meeting.

Pillai, a Greenpeace senior campaigner was â€˜offloadedâ€™ at Delhi airport onÂ January 11Â from a flight to London where she was scheduled to make a presentation before British MPs regarding alleged human rights violations at Mahan in Madhya Pradesh.

The incident had happened a few months after the blocking of funds to Greenpeace by the Home Ministry. The issue had led to a huge controversy.

A joint press release by the members of the civil society said that they met Gandhi and expressed concern about â€˜attackâ€™ by the government on their freedom and autonomy and right to dissent.

In the interactive session, Gandhi assured the members of civil society that the Congress Party would be in the vanguard of defending and enhancing all the fundamental fights and directive principles enshrined in the Indian Constitution. “He said that he shared the concerns raised by the delegation on democracy and dissent being curbed,” the release said.

Their meeting with Gandhi is the first in a series of meetings with all political parties “not in alliance with the BJP-led NDA” and seeks to explore commonalities of how civil society across India can encourage a broad anti-authoritarian, pro-poor, pro-environment platform, the activists said.