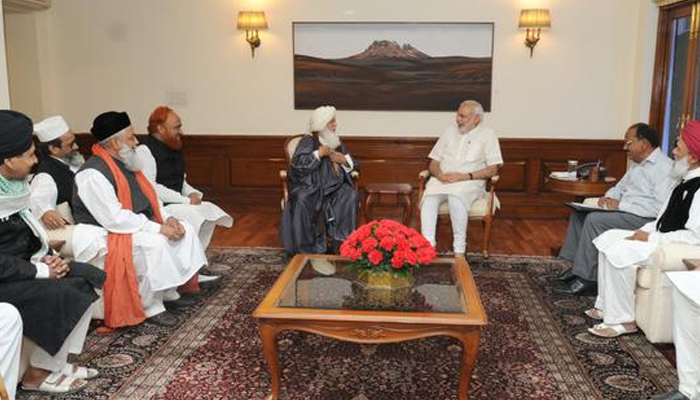 Interacting with the leaders, Prime Minister said he neither believes in politics which seeks to divide people on communal lines, nor will he ever speak communal language. He said the politics of majority and minority had caused a lot of damage to the country. He said employment and development are the solution to all problems, and he is focused on delivering them.

The Prime Minister spoke of the initiatives in skill development taken by the Union Government, and the work done by him as Chief Minister of Gujarat in fields such as education of the girl child, and revival of the kite industry.

The Prime Minister appreciated the gesture of the leaders, to take time out to meet him, even on the busy festive occasion of Shab-e-Barat.

The Delegation members appreciated the Prime Minister’s leadership over the last one year, and said they wanted to forge a partnership for progress and development with the Prime Minister. They said that the Muslim community had rejected the divisive politics of vote-banks, and was interested in development.

The leaders congratulated the Prime Minister for his vision of Muslim youth with a Quran in one hand and a computer in the other. They also congratulated him for the country’s success in the adoption of the International Day of Yoga, by the United Nations.

Modi’s push towards communal harmony in the last few days, highlighted by his urging party leaders and members to refrain from making anti-minority remarks and inflaming their sentiments along with his condemnation of anti-minority remarks by RSS and other fringe groups has shown a positive image and outlook the Prime Minister has in mind.Â

The Union Minister of State for Minority Affairs, Mukhtar Abbas Naqvi, and the National Security Advisor, Ajit Doval, were present on the occasion.
Â