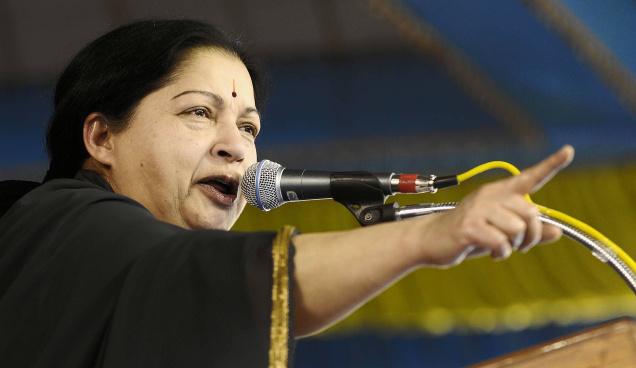 Chennai: Making her way past hundreds of joyous supporters, AIAMDK supremo and Tamil Nadu Chief Minister J Jayalalithaa filed her nomination papers on Friday for the June 27 bypoll to the Radhakrishnan Nagar Assembly constituency in Chennai.

In what is expected to be cakewalk for her in the wake of major opposition parties deciding to boycott the bypoll, the 67-year-old Jayalalithaa aims to make her debut from a constituency in this metropolis.

Jayalalithaa, who was accompanied by close aide Sasikala, filed her nomination at the Corporation Zonal office here.

The entire route beginning from her residence was decorated with festoons as AIADMK members braving the scorching sun waved the party flag and greeted her amid playing of traditional south Indian music instruments.

Having been acquitted in a wealth case that threatened to derail her political career, Jayalalithaa returned as Chief Minister of the state for the fifth time last month and has to be elected as MLA within six months.

P Vetrivel of AIADMK had quit as MLA of RK Nagar on May 17, paving the way for Jayalalithaa to contest from a city constituency and return to the 234-member state Assembly in which her party enjoys a strong majority of 150.

While DMK, MDMK, VCK and PMK have announced boycotting the boypoll, CPI with the support of CPI(M) has decided to contest while NDA constituents BJP and DMDK are yet to make up their mind.

This is the first time Jayalalithaa is contesting for the Assembly from any constituency here.

In 1989, she had represented Bodinayakanur (Theni) and later Bargur (Krishnagiri) and Andipatti (Theni), all rural constituencies.

In the 2011 elections, she had won from her native and temple town of Srirangam (Tiruchirappalli), but had to vacate it following her conviction in the Rs 66.66 crore disproportionate assets case by a trial court in Bengaluru.

She was however acquitted of all charges by Karnataka High Court on May 11, paving her way for return as Chief Minister.

She was subsequently sworn in on May 23.