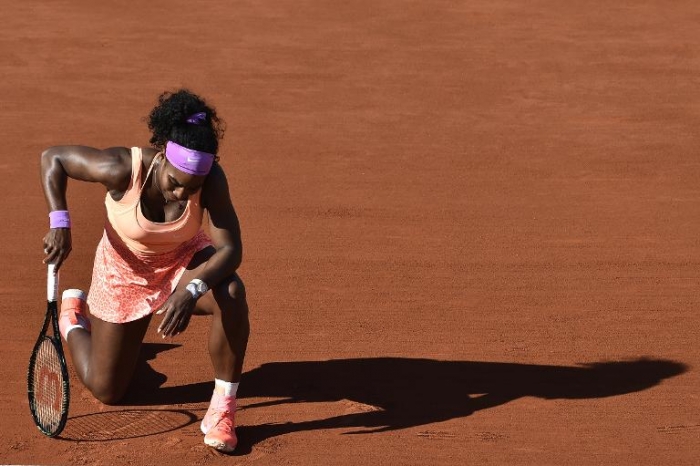 The world number one and Paris champion in 2002 and 2013 was clearly ill and distressed for large parts of her semi-final.

Friday’s result was tough on Swiss 23rd seed Bacsinszky who was making a living washing dishes and working in hotels just two years ago during an injury-enforced absence from the tour.

“I kept trying to find the energy and keep fighting. I wasn’t feeling well,” said Williams who has now reached a 24th major final having come back from a first-set deficit four times at the tournament.

Williams was all business as usual in her first two service games, giving up just a single point.

But Bacsinszky wasn’t intimidated and broke for 3-2 with a searing crosscourt backhand off a Williams’ second serve which could have been lifted from the American’s playbook.

Williams, who went into the tie having lost just three of her 26 Grand Slam semi-finals, was clearly suffering in the 29-degree heat.

Her breathing was laboured, she wearily demanded more and more ice-towels during changeovers and was looking increasingly disorientated.

The blonde Swiss outsider had nothing to lose and played like it.

Having started a college course in hotel management during her absence from the tour, Bacsinszky was revelling in her moment in the sun, as fierce as it was on Court Philippe Chatrier.

She saw two set points disappear and then face down a break point in the 10th game but wrapped up the opener when Williams overhit an easy forehand drive.

Bacsinszky’s 16 winners were twice as many as her opponent, perfectly illustrating the requirement that attack is the only option against the American superstar whatever her state of mind.

Williams fought off five break points in the fifth game of the second set but was broken when she fired a desperate backhand wide.

At the changeover, Williams’s coughing spurts became so loud that they echoed around the arena courtesy of the courtside microphones.

But somehow she dug deep, retrieved the break and then raced away with the second set having won four straight games.

Rejuvenated, the top seed broke for 1-0 in the decider, backed it up with a double break for 3-0 and again for 5-0 as Bacsinszky wilted.

The contest was over when the Swiss fired a loose backhand having won just 12 points in the entire final set.