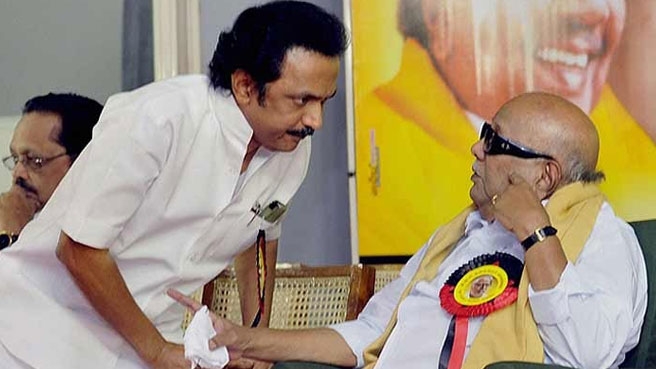 Chennai: The main highlight of M Karunanidhiâ€™s 92nd birthday celebration was neither the cutting of a 92 kilo cake nor the release of as many pigeons, but it was when the DMK patriarch stopped short of stating that his son and party treasurer MK Stalin would succeed him as the party chief.

Referring to Stalin, Karunanidhi said “treasurer until now” and then gave a pause and amid thunderous applause added, “if understood, then it is alright and if not understood, still it’s fine.”

Even though in the past Karunanidhi had made it clear that Stalin would take over the mantle from him, there was expectation among the latterâ€™s supporters that the birthday would be a proper occasion for the announcement.

Stalin, who was seated next to him, was all smiles when his father and party chief uttered the words. In what is seen as Karunanidhi’s reply to a criticism that young people faced difficulties often in growing in DMK’s party hierarchy which had several old faces, he said everyone could aspire for top positions in the party.

Referring to Stalin’s party work and detailing his own growth story in DMK, he recalled how he went on to become the party president after starting as a secretary for an area in Thanjavur district.

“It will be enough if each and every party youth thought of growing like that, and each and every youth can become a Karunanidhi, Stalin and Duraimurugan (a former Minister and senior leader),” he said, amid rounds of applause. He also appealed to party youths to give up selfishness to grow and work for an egalitarian society.
Â