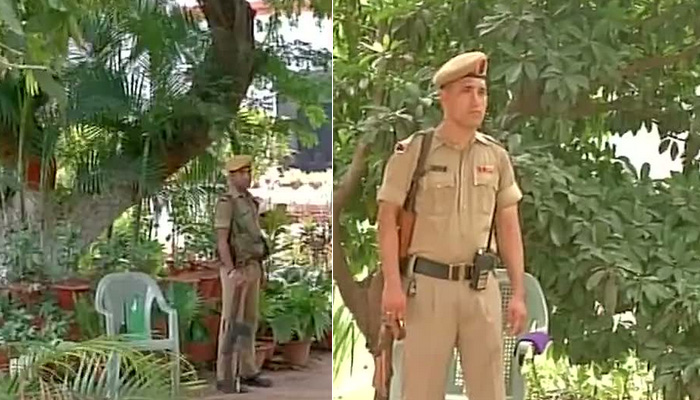 Manjhi, even after being removed from the chair in February this year, continues to occupy residence designated for Bihar chief minister. However, current Bihar Chief Minister Nitish Kumar stays in a bungalow at 7 Circular Road.

HAM spokesman Danish Rizwan, in a statement said, 24 policemen, including 8 sub Inspectors and 16 constables have been deployed in One Anne Marg, especially to guard hundreds of trees of mangoes and litchi fruits.

Policemen deployed on duty at former CM’s residence said they have been instructed to guard the fruits and prevent anybody picking even the fruits that fall on the ground on its own.

Rizwan described this as “insult” of a dalit.

When Manjhi’s reaction was sought on the issue, he said many poor visits him at his residence and the latest security arrangements might be aimed at preventing them to take away the fruits.

The matter also gave an opportunity to RJD and BJP to attack Nitish Kumar government.

Senior BJP leader Sushil Kumar Modi said it was bizarre that a person occupying a bunglow was deprived of enjoying fruits from trees planted there.

He alleged that this was an insult of a mahadalit by Chief Minister Nitish Kumar who dared to rebel against him.

RJD Vice President Raghubansh Prasad Singh said instead of paying attention to improve law and order situation in the state, giving priority to safeguarding mangoes and litchi, was beyond understanding.

Manjhi was handpicked by Kumar to succeed him after he stepped down from the CM’s post in the wake of JD(U)’s debacle in general election.

But, he turned a detractor after which he was unceremoniously removed from the post in February this year.