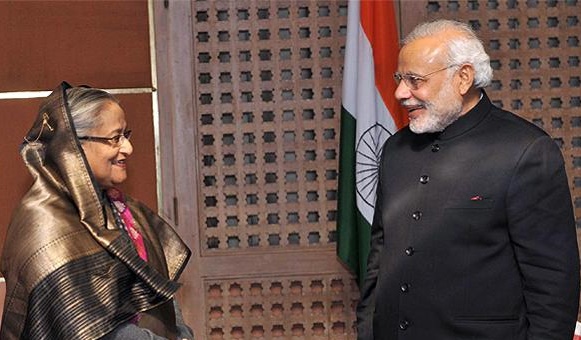 Dhaka: Indiaâ€™s Prime Minister Narendra Modi will hand over a record of Bangabandhu Sheikh Mujibur Rahmanâ€™s speech delivered at Kolkata in 1972 to Sheikh Hasina during his Dhaka visit.

Modi will arrive on June 6 on his first visit to Bangladesh and hold bilateral talks with Hasina in the afternoon.

A senior official at the foreign ministry told bdnews24.com that he would hand over a CD of the speech the nationâ€™s founding father delivered at Kolkata on Feb 6, 1972 during the meeting.

That was the independence heroâ€™s first official visit to India after freedom from Pakistan, and he spoke at a banquet reception the then Indian Prime Minister Indira Gandhi hosted in his honour.

Foreign Minister Abul Hassan Mahmood Ali recently said that in that speech Sheikh Mujib first conceptualised the idea of SAARC for the regional peace and stability.

Modi will also present the transcripts of the Indian parliamentary sessions regarding the amendment of the constitution for the land boundary settlement.

Hasina will present him a photograph of â€˜signing instrument of surrender 1971â€™ when Pakistan army surrendered to the joint forces and Bangladesh achieved victory after nine months of bloody war on Dec 16.Â

Dhaka considers Modiâ€™s visit â€œhistoricalâ€ as it came after the settlement of 41-year old land boundary issue, ending stateless life for more than 50,000 people living in enclaves on both sides of the border.

He also promised to do â€œeverythingâ€ for Bangladeshâ€™s growth, peace and prosperity as part of his neighbourhood policy.

At least 20 instruments ranging from security cooperation to people-to-people contacts would be signed during his visit that Dhaka believes would strengthen the friendly relations further.