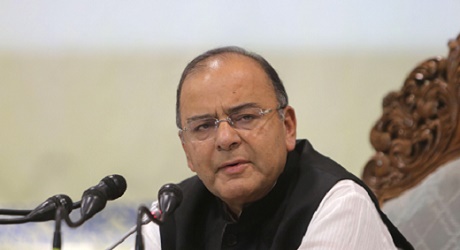 New Delhi: Finance Minister Arun Jaitley on Thursday sought to allay fears over predictions of deficient monsoon saying conclusions on that basis either on inflation or some kind of distress situation are â€œfar-fetchedâ€œ.

He also said in the last 48 hours, ever since the IMD predicted deficient monsoon this year, the conclusions were being drawn up in an exaggerated manner and it was necessary to place the finance ministryâ€™s view on the subject.

Dismissing the slide in the stock markets in last three days as not a trend, the Minister said revenue, especially indirect tax collections â€” a key indicator, has shown an impressive jump.

Mr. Jaitley expressed confidence that foodgrain production will not be impacted significantly by the prediction of below- normal rainfall in north-western region as the area is well-irrigated while monsoon will be normal in all other parts of the country.

Also, the country had enough foodgrain stocks to meet any contingency, he said.

â€œThe kind of speculation that we have been seeing and speculative analysis that we have been reading about appears to be somewhat misplaced. What is extremely relevant is obviously has significant impact on Indian economy,â€ he told reporters here.

Mr. Jaitley said what was relevant was the geographical distribution of monsoon and the timing of rainfall. â€œThese are almost as significant if not more than the extant of rainfall.

And this an area by which the impact is more significant than the sheer volume itselfâ€œ.

The IMD on Tuesday predicted that rainfall was likely to be only 88 per cent of the long-term average and the Reserve Bank of India suggested the government to draw contingency plans to deal with the impact of poor monsoon on prices.

The BSE Sensex has fallen by 1,035.57 points in last three trading sessions on fears of drought.

In the wake of predictions about the monsoon by the IMD, Mr. Jaitley called a meeting of senior meteorological scientists yesterday and had a detailed analysis of the prediction and estimates with them.

â€œTheir advance predictions appear to be suggesting that we will be somewhat closer to the normal in South, Central and North East zones. The slight inadequacy, if at all, is in the North-West and a large part of North-West has substantial irrigation facility also.

â€œAssuming that the advance predictions are correct, on account of geographical distribution the impact on foodgrain production may not be very significant,â€ he said.

The Minister recalled that there was a similar monsoon pattern last year. The advance predictions this year are somewhat better than last yearâ€™s. â€œIn any case there is abundance of food grain available and therefore, the kind of food management that we saw last year prevented any form of inflationary trend in the food management itself.â€

Mr. Jaitley said so for anybody to draw conclusion on that basis of either inflation or some kind of distress situation is farâ€”fetched.

â€œI donâ€™t anticipate any situation of this kind even with the kind of prediction which have been made,â€ he said.

This, he said, is also supplemented by a few other trends which are available. The recent growth figures which were given were itself giving a positive indication. The quantum of public expenditure has increased and you likely to see far bigger increase in next few months.

He said revenue, particularly indirect tax revenue, which is one of the key indicators, is showing an impressive jump.

â€œIn the last few months and I have been getting data also bank wise, many stalled projects have started, some still need to be pushed up.

â€œThere is a downward movement in bank NPAs and therefore, coupled with these trends I foresee the recovery trend in the economy continuing,â€ he said.