Home Politics Frienemies in Bihar, anyone? 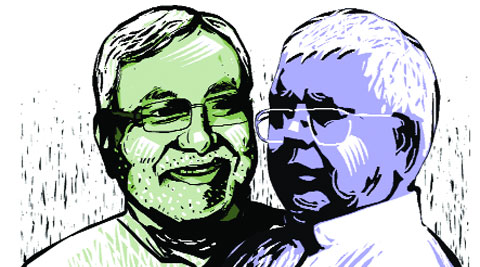 Friendship is a luxury one cannot afford in politics, unless it is forged within one political party or with an ally whose ideology more or less stems from the same thought process. Besides this, friendship is merely a means to an end, the duration of which depends entirely on the time required to derive benefits from the other.

Lalu Prasad Yadav and Nitish Kumar are the poster boys for frienemies in Indian politics. When Lalu became the Chief Minister of Bihar in 1990, he was thick friends with Nitish Kumar, who has risen through the ranks with Lalu Yadav and went on to become his right-hand man.

However, in a true bollywood-esque manner, the two separated their ways in 1994 when a seemingly angered Kumar refused to continue supporting the Lalu regime because of its maladministration in the state. Kumarâ€™s anger was to the extent that immediately after quitting the RJD, he went on to form the Samata Party with veteran politician George Fernandes. Since then, the two refused to acknowledge each other in public and Nitish left no stone unturned in ridiculing and criticizing Laluâ€™s regime in the state, being predominantly active during the fodder scam.

The situation took an upswing for Nitish Kumar after a well fought battle from 1997 to 2005 when he managed to dethrone Lalu from the seat of the chief minister in 2005 by forming a pre-poll alliance with the Bhartiya Janata Party while Lalu stuck to his alliance with the Congress.

However, the situation took a turn for the worse as in the 2014 Lok Sabha elections, Nitish decided to part with allies BJP and he had to step down as the chief minister eventually. Though it did not signal any victory for Lalu, it did signal the end of an era.

The Game of Thrones

The next chapter in Bihar politics commenced when Nitish Kumar decided to resurface and take command of the stateâ€™s politics, a position he had given to Jitan Ram Manjhi who refused to step down to make way for Kumar.

Expelling Manjhi from JD(U), the only viable option for Kumar to return to the helm of political affairs, Nitish understood that he had less than a year to win over the peopleâ€™s vote to remain at the throne in the state.

However, with a mutual distrust of the Modi-led BJP government at the Centre, RJD, JDU, SP, Janata Dal Secular, INLD and the Samajwadi Janata Party formed the Janata Parivar â€“ a political alliance to act as a third front against the BJP â€“ with a singular aim in mind: bringing the leaders in the alliance at the helm of political affairs in their respective states and defeating the BJP juggernaut.

It is a well documented fact that Bihar as a state relies heavily on caste and community based politics and a highly polarized society.

While Lalu holds the key to the OBC and the backward classes, Kumar alienated himself from the upper-middle class that constitutes 15% of the population and 30% of the voting public. The upper-middle class is now oriented towards an aggressive BJP led by Amit Shahâ€™s campaigning in the state. However, the 16% Muslim vote-share in the state could swing towards Nitish Kumar after he showed no interest in continuing with his alliance with the BJP. This could also change though as sources said Nitish has not completely ruled out an alliance with BJP and has held back-channel talks with Amit Shah to salvage any form of relationship after their bitter split before the 2014 General Elections.

However, there is problem now stemming in the Janata Parivar, prominently so the fight between Lalu and Nitish who individually are trying to become the chief minister of Bihar. The problem between the two further aggravated when Lalu wanted to bring in Jitan Ram Manji in the Janata Parivar because of his allegiance to the dalits and mahadalits in Bihar, a move which did not go down well with Nitish.

Furthermore, a problem started brewing between the two when Lalu found out that Rahul Gandhi and Nitish were touted to meet and Lalu went ahead with a meeting with Sharad Yadav in isolation. The mutual distrust between the two came out in the open when a source close to the both made their secret meetings and its talks public.

While both the socialist leaders have made it quite evident that they cannot or do not wish to work together, their fight to outwit each other may only be solved by two national kingmaker parties, BJP and Congress. Whether they decide to move beyond the shadows of the maha-milaap (Janata Parivar) and swear allegiance to any of the two national parties is yet to be seen.