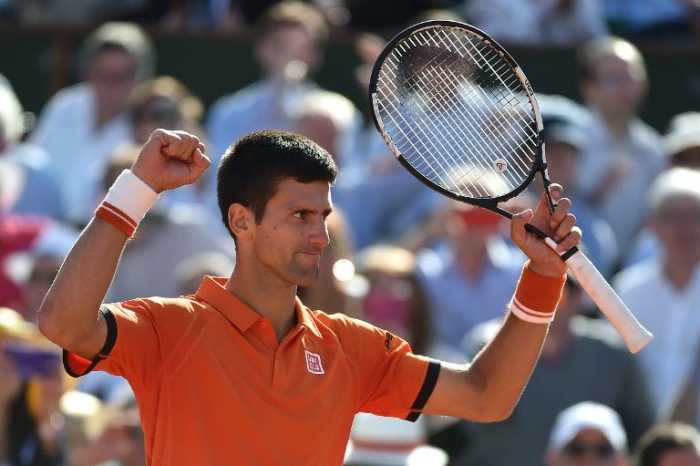 Novak Djokovic and Andy Murray meet for the 27th time on Friday with a French Open final place at stake and with history on their shoulders.

World number one Djokovic ended the reign of nine-time champion Rafael Nadal in the quarter-finals, handing the Spaniard just his second defeat in 72 matches at Roland Garros in a decade of extraordinary dominance.

A win on Friday for the 28-year-old Serb will put him in a third final in Paris and just one victory away from a first French Open trophy and a career Grand Slam, a feat achieved by just seven other men.

It would also place him halfway to becoming only the third man to complete a calendar Grand Slam, a mission so daunting that only Don Budge (1938) and Rod Laver (1962 and 1969) have managed to pull it off.

By seeing off David Ferrer for the first time on clay, Murray has become the first British man to make the semi-finals in Paris on three occasions.

Victory on Friday would make him the first Briton to reach the men’s final since Bunny Austin in 1937. Fred Perry, meanwhile, remains Britain’s last king of Paris, winning the title in 1935.

Djokovic has a 40-2 record in 2015 having clinched a fifth Australian Open as well as Masters titles at Indian Wells, Miami, Monte Carlo and Rome.

Murray had never won a title on clay before this year — now he has two courtesy of Munich and Madrid.

He, too, has 15 wins under his belt on clay with his one ‘loss’, to David Goffin in Rome, only coming via a withdrawal.

But Djokovic will still start favourite.

He has an 18-8 career lead over the Scotsman having won their last seven meetings, a run stretching back to Murray’s historic Wimbledon title in 2013.

Djokovic has also won the pair’s only two meetings on clay although it’s been four years since their last clash on the sport’s most demanding surface.

“Andy has improved on clay, no doubt about it,” said Djokovic, who has reached a 24th successive Grand Slam semi-final.

His run to the Paris last-four has been achieved without dropping a set. He has not even been pushed to the inconvenience of a tiebreak.

“Andy is moving better, serving really well and he’s always had a touch. He’s extremely talented and a great fighter.”

Djokovic has reached his fifth successive French Open semi-final and has been runner-up twice, to Nadal in 2012 and 2014.

So something has to give on Friday in the red-hot atmosphere of Court Philippe Chatrier which is likely to be more intense courtesy of the 30-degree heat expected at the end of the week.

When facing Murray in those kind of conditions, it has been Djokovic who has proved the more durable.

In the Australian Open final in January, he won the decisive fourth set 6-0 and repeated it in the Miami Masters final in March, again 6-0 in the decider.

“If it gets up to that temperature, it will make it tough physically and the court will become quicker,” said Murray.

“But having not lost on clay this year and having some big wins on the surface is important for me (he defeated Nadal in the Madrid final). I will just keep doing what I have been doing and have a good game plan.”

Wawrinka knocked out compatriot Roger Federer in a straight-sets quarter-final shock while Tsonga reached his second semi-final in Paris by putting out fourth seed Tomas Berdych in the last-16 and fifth-seeded Kei Nishikori in the quarters.

Wawrinka, the 2014 Australian Open champion, has won three of the pair’s five claycourt meetings, including their most recent in November when Switzerland defeated France in the 2014 Davis Cup final.

Tsonga is looking to become the first Frenchman to reach the final in Paris since Henri Leconte back in 1988 while the last home champion was Yannick Noah in 1983.

But for 30-year-old Tsonga the first objective is to end a run of four successive Grand Slam semi-final defeats since he reached the Australian Open final in 2008.