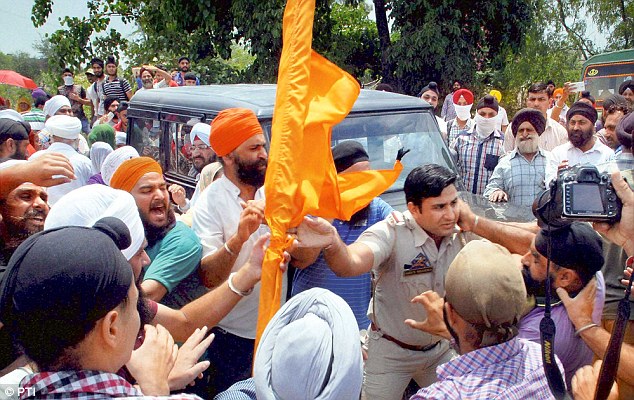 Jammu: In a probe for removing posters about a programme organized in a Sikh-dominated area to pay tributes to Khalistan champion Jarnail Singh Bhindranwale ahead of his death anniversary, a mob attacked the police with sticks and kirpans on Tuesday, injuring three of them.

Members of the Sikh community had put up the posters praising Bhindranwale, who was killed along with his supporters inside Amritsar’s Golden Temple in 1984 under the infamous operation â€˜Blue Starâ€™. A police officer said the posters were removed as they “sensed they might generate a controversy”.

The protesters raised slogans like ‘Khalistan zindabad’ and in favour of Bhindranwale.

A police party rushed to the area was stoned, forcing cops to cane charge the protesters, who retaliated with sticks and kirpans.

A police officer identified the injured cops as SHO Arun Kumar, who suffered stab wounds in his stomach, and sub-inspector Bharat Singh, who was stabbed in his back.

Singh’s personal security officer, Pervaiz, was hit by a stone. The three are recuperating at a hospital in Jammu.

Top officials were rushed to the scene to pacify the protesters. The situation was under control but the protesters were on roads till last reports came in.

Khalistani militants have enjoyed pockets of support in Jammu’s Satwari area, where elements from outfits like Khalistan Zindabad Force (KZF) have been sheltered in the past.