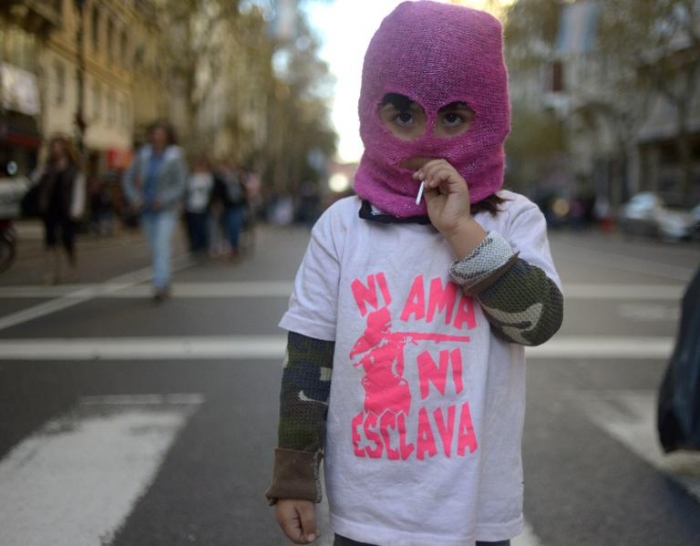 Hundreds of thousands of people took to the streets across Argentina on Wednesday to condemn violence against women after a series of brutal murders.

Carrying signs with slogans like “machismo kills” and “enough deaths,” Argentines flooded the streets of Buenos Aires and more than 100 other cities.

Marches were also held in Chile, Uruguay and Mexico.

Argentina has been shocked by the murder of a kindergarten teacher whose estranged husband slit her throat in front of her class and that of a 14-year-old girl whose boyfriend is accused of beating her to death because she got pregnant.

The case of another woman whose ex-boyfriend stabbed her to death in broad daylight at a Buenos Aires cafe has also stoked outrage.

“We’re seeing a social and political inflexion point,” with people mobilizing en masse because of the recent killings, said Fabiana Tunez, director of one of the main organizations behind the marches, women’s rights group La Casa del Encuentro.

Argentina is one of 16 Latin American countries that have written the crime of “femicide” into their penal codes, setting down harsher punishments for the killing of a woman by a man when gender plays a part in the crime.

“Enough femicides,” Barcelona star Messi wrote on Facebook. “We join all Argentines today in shouting out loud ‘Not One Woman Less'” — the rallying cry for the march (Ni Una Menos, in Spanish).

Kirchner spoke out on social media against a “culture that devastates women,” condemning what she called the everyday “violence” of catcalls, dirty jokes, obscenities and TV programs that “objectify” women.

In addition to the “femicide” law, Argentina has a 2009 law to crack down on violence against women, but activists say it has not been effectively implemented.

And the problems do not stop there, said businesswoman Maria Elena Cornide, 36.

“This is a social wake-up call against injustice, against lower salaries for women. Domestic violence is not the only scourge we suffer from,” she said.

About 100 protesters gathered in the Chilean capital Santiago with signs reading “Mourning and outraged.”

And several thousand marched in the Uruguayan capital Montevideo.

In Mexico, where domestic violence kills seven women a day, protesters were due to rally at the capital city’s emblematic Angel of Independence later in the evening.