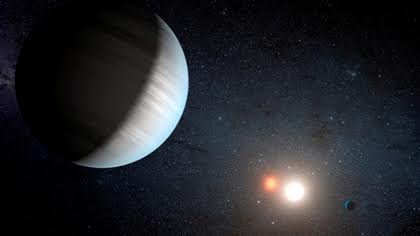 Astronomers have recently discovered a young solar system around a nearby star that resembles Earth’s solar system.

An international team led by Thayne Currie of the Subaru Telescope and using the Gemini South telescope revealed images a ring-like disk of debris surrounding a Sun-like star, in a birth environment similar to the Sun’s.

Currie, a Subaru Project Fellow research astronomer said that the discovery of the bright ring of orbiting the star HD 115600 changes everything.

The ring is almost exactly the same distance from its host star as the Kuiper Belt is from the Sun, and it receives about the same amount of light. The star itself is just slightly more massive than the Sun and is a member of a massive grouping of 10- to 20-million-year-old stars called the Scorpius-Centaurus OB association. Its birth cloud is very similar to the nebula in which the Sun formed some 4.5 billion years ago.

By using models that predict how planets of different masses and orbital separations shape a debris disk, the team calculated what kind of planet might be distorting HD 115600’s ring. They found that eccentric versions of planets much like Jupiter, Saturn, Uranus, or Neptune could explain the shape and other properties of the ring.