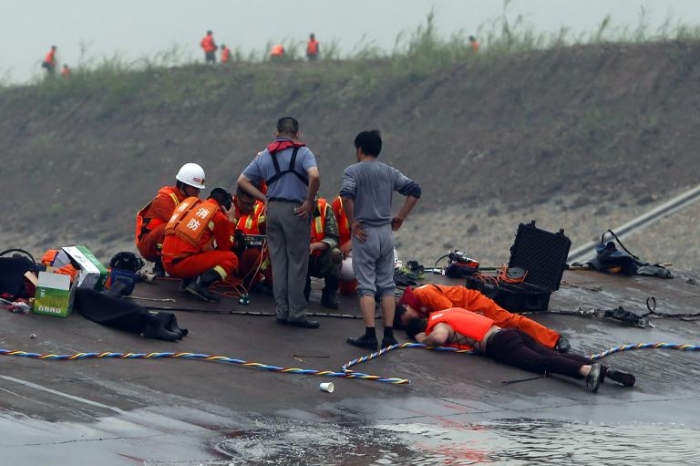 Chinese rescuers were working through the night in a desperate race to find survivors from a capsized cruise ship, with more than 400 people still missing after the boat sank in a storm on the Yangtze river.

By Tuesday night just 14 people had been confirmed as surviving after the Dongfangzhixing, or “Eastern Star,” rapidly overturned late Monday, the official Xinhua news agency reported.

Seven bodies have been recovered from the wreckage, leaving hundreds more still missing, possibly trapped within the ship which apparently sank in a matter of seconds with 458 people on board, state media said.

Rescuers pulled at least three survivors from the wreckage Tuesday as fears mounted for the more than 400 still missing.

Local reports said the passengers were mostly aged over 60.

Television footage showed rescuers on top of a section of the ship’s hull which remained above water, some pressing their ears against it.

Zhang Hui, a 43-year-old tour guide on board, described a storm roiling the boat which tilted by as much as 45 degrees just after 9:00 pm local time on Monday, Xinhua said.

“Rain poured down on the right side of the boat, many rooms were flooded,” Zhang said, according to Xinhua. “Even if the windows were shut, water leaked through.”

Passengers began taking soaked quilts and TV sets into the ship’s hall around 9:20 pm, Xinhua quoted Zhang as saying, in what appeared to be an attempt to keep the items dry.

Passengers seemed to have little warning before the ship sank minutes later, with Zhang recalling he had “30 seconds to grab a life jacket”.

The captain and chief engineer, who were among the survivors and were being questioned by police, both reportedly said the ship was caught in a freak “cyclone”.

Foreign journalists were barred from coming closer than about two kilometres from the centre of rescue efforts.

As heavy rains continued to hit the area, an AFP photographer saw more than a dozen ambulances driving away from the rescue area, and at least two body bags apparently containing dead passengers.

CCTV said the 250-foot (76.5-metre) vessel had floated three kilometres (1.9 miles) down-river after it capsized in Jianli county, part of the central province of Hubei.

Teams of police worked to get small motorboats in the water to search for survivors in the rain, while other emergency personnel looked on from the shore.

Xinhua reported that three divers found a 21-year-old man in a small compartment Tuesday afternoon, saying he was given diving apparatus and was able to swim out by himself.

State broadcaster CCTV showed rescue workers carrying an elderly woman on a stretcher, adding that another 65-year-old woman was in “good physical condition,” after being hauled from the boat.

A local man surnamed Wang told AFP the storm on Monday night was the worst he had seen in years.

Xinhua said an investigation by the ministry of transport had determined the ship was not overloaded and had a sufficient number of life jackets.

There were 458 people on board the Dongfangzhixing when the ship capsized at 9:28 pm, CCTV said, including 406 Chinese passengers, five travel agency workers and 47 crew members.

The vessel was owned by a firm that operates tours in the scenic Three Gorges dam region, some distance from the accident site.

The boat sent no emergency signal and seven people from the boat swam to shore to raise the alarm after it sank, according to reports.

The ship started operations in 1993 and was due to be retired in three years, the 21st Century Business Herald quoted an unnamed former senior executive with the boat’s operator, the Chongqing Eastern Ship Company, as saying.

The accident occurred in the middle reaches of the Yangtze, a wide and rapidly flowing waterway which at 6,300 kilometres is Asia’s longest river.

The Hubei Daily said about 150 boats — including about 100 fishing vessels — and more than 3,000 people were involved in the rescue effort, including 140 divers.

Distraught relatives of the passengers gathered at a Shanghai travel agency on Tuesday, sobbing and pleading for information on their loved ones’ fate.

One man expressed his grief with a tearful apology to his parents, who were among the hundreds of missing.

“I still have so many things I want to tell them. I thought they would come back safe and sound,” added the man.

A 64-year-old man surnamed Zhang said he spoke to his wife on the boat Monday evening hours before the accident, and she told him about poor weather and heavy rain.

“I usually call her twice a day. But today, after I heard the news… the phone call never got through,” he said.