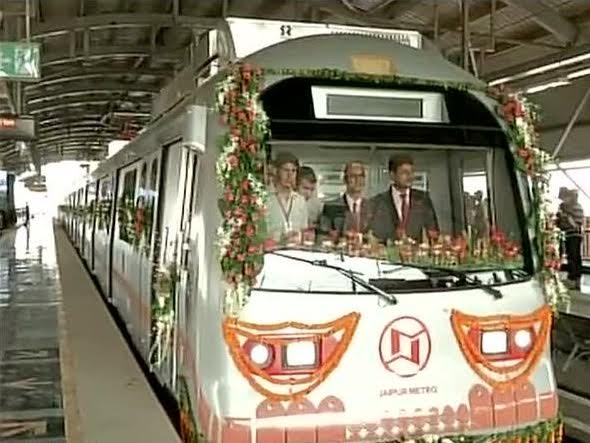 Jaipur: If you thought Jaipur was only about â€˜oldâ€™ heritage buildings and forts, hereâ€™s something thatâ€™ll change your perspective. Apart from having an old-world charm about it, Jaipur also has become one of the few Indian cities that flaunts a metro rail service.

The Pink city will also be added to the list of Indian cities to have metro services on its map.

Chief Minister Vasundhara Raje flagged off the maiden metro service in the stateÂ on Wednesday and the service will be thrown open to the public by afternoon.

The 9.63-km elevated section of the metro with nine stations and built on standard gauge connects the cityâ€™s residential area Mansarovar to business hub in Chandpole. Despite missing the deadlines repeatedly, it is touted as one of the fastest-built metros in the country in a record time of nearly four-and-a-half-years.

According to projected estimates, the line will ferry approximately 1.2 lakh passengers daily. But to begin with, the Jaipur Metro Rail Corporation is hoping to get at least 30,000 passengers per day. A total of 10 four-coach trains will be making 131 trips each day between the two terminal stations at a frequency of 10 minutes in peak hours and 15 minutes in off-peak hours.
This will not just make life easier for the thousands of daily commuters, but will also give a boost to the tourism that Jaipur has to offer.Â

Once completed, the metro will reach Badi Chaupar, right outside the popular Hawa Mahal in the walled city. Right from the beginning of her second term in office, Chief Minister Raje had disapproved of the implementation of the metro project, a brainchild of former chief minister Ashok Gehlot. The 12-km east-west Metro corridor was one of Gehlotâ€™s big ticket projects that he had expected to flag off by the end of his tenure.
Â