NASA to get its own alien spaceship | Newsmobile
Saturday, June 25, 2022

Home Science & Tech NASA to get its own alien spaceship 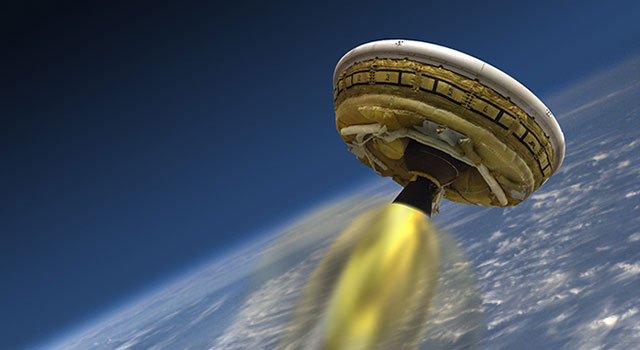 Is it a bird? Is it a plane? Is it Superman? Is it an alien from Men in Black? Sadly, it is none of them but something even better!

It is a flying saucer. But before you run for cover and think it is a scene out of â€˜War of the Worldâ€™sâ€™, relax. It is just a NASA mission model that is shaped like a flying saucer. Cool, right?

Outfitted with a remodeled supersonic parachute, a prototype inflatable braking system to land heavy payloads on Mars is being prepared for a second test run high above the Pacific Ocean as early as this week.

NASAâ€™s first flight of the saucer-shaped Low-Density Supersonic Decelerator, or LDSD, was launched aboard a massive helium balloon from the U.S. Navyâ€™s Pacific Missile Range Facility in Kauai, Hawaii, last June. It was released at an altitude of about 120,000 feet, paving the way for a rocket to ignite and catapult the experimental spacecraft to 180,000 feet above the planet.

Zipping along at 3,000 mph â€“ roughly four times the speed of sound â€“ LDSDâ€™s inflatable shield deployed as advertised, increasing the spacecraftâ€™s size to 20 feet in diameter so that it would experience more friction to slow its descent through the atmosphere.

What happened next was a big surprise: LDSDâ€™s 110-foot diameter parachute shredded during release, abruptly ending the test.

â€œWe saw more dynamic and much more turbulent parachute inflation than we had ever known â€¦ things like the suspension lines exploding like lightning, moving in a very chaotic manner all over the place,â€ Clark said.

The parachute has been reshaped, enlarged, reinforced and restructured so that even if a part of the material tears, the rest of the parachute should remain intact.

NASA is spending about $230 million on the project in an attempt to develop a system to at least double the amount of mass that can be landed on Mars.

NASA is working on a sample return mission that will require the landing of heavy rockets to launch from the planetâ€™s surface, as well as eventual human missions to Mars.

Winds have to be exactly right to position the balloon properly for the test and the first attempt could occur as early as Tuesday. If weather conditions delay the test past two weeks, it will be retargeted for a second launch opportunity between July 7 and July 17.