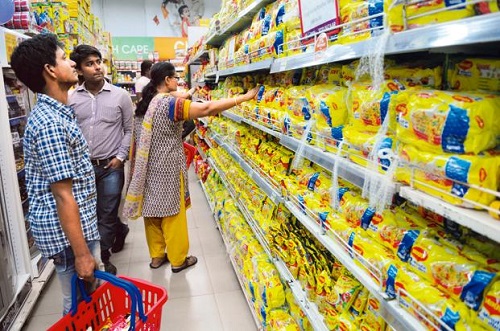 New Delhi: The Delhi governmentÂ on WednesdayÂ imposed a ban on the sale of Maggi noodles, the brand from Swiss foods major Nestle from its stores after it found lead and monosodium glutamate (MSG) in the eatable beyond permissible limit. Following the row Future group decided to scrap the sale of Maggi from all its Big Bazaar stores across the country.

Ten out of 13 samples tested for lead content in the popular food item were found to have amounts higher than permissible limits.

“This falls under the category of misbranding,” Delhi health minister Satyendra Jain had said. He added the government has decided to file a case against Nestle for selling unsafe product and fine it for misbranding Maggi noodles. Sources said Nestle officials will be summoned by the Delhi Government for explanation.

“If the contents are injurious to health and there are complaints, then action will definitely be taken against the company,” said Ram Vilas Paswan, Union Minister for Consumer Affairs and Food.

Many other states said they are now testing Maggi, including Gujarat, Maharashtra, Bihar, Haryana, Punjab and Himachal Pradesh. Kerala has ordered a pullout of Maggi noodles from about 1300 government-run outlets, till there is clarity on quality.

Maggi sales have plunged in India since laboratory tests showed the noodles contained lead and the chemical flavor enhancer MSG at levels higher than the legal limit.

The brand from Swiss foods major Nestle, which is synonymous with noodles in India, has therefore also witnessed a severe dent in its popularity and image. Maggi, which clocks around Rs 1500 crore annually, contributes a significant portion of Nestle’s total business in India.

Delhi health minister Satyendra Jain had said, “Last week, we lifted 13 samples of Maggi for testing following media reports of these being unsafe for consumption. We found the masala samples, tastemakers of at least 10 such packets, had lead content beyond the prescribed limit ofÂ 2.50pm.” Jain also said five samples of masala were found containing monosodium glutamate (MSG) without proper label declaration.