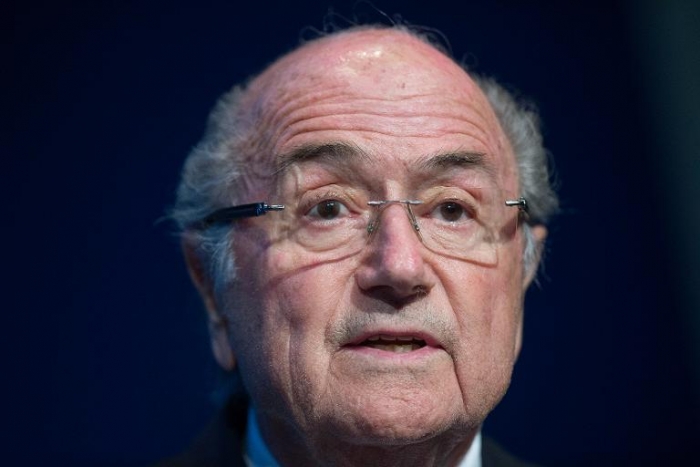 Sepp Blatter has always loved maritime analogies. He promised to guide FIFA into a safe port, but on Tuesday his ship foundered on the rocks after 17 years at the helm of the world’s most popular sport.

The 79-year-old Swiss stunned the watching world with his resignation announcement just four days after being voted to a fifth term and repelling the pointed questions of his fiercest critics, the British media.

Blatter said in his election victory speech he would be the “commander” who would take FIFA “out of the storm.”

While Blatter has seen off mutinies by discontented FIFA members, he could not hold off US and Swiss investigators.

Blatter has not been named as a suspect. But their inquiries into bribes and the award of the 2018 and 2022 World Cups led to him walking the plank.

It has been an incredible turnaround for a man who last month was compared to Jesus, Moses, Winston Churchill, Martin Luther King and Abraham Lincoln by Dominican Republic FA president Osiris Guzman at a Central and North American confederation (CONCACAF) meeting.

It was the arrest of CONCACAF president Jeffrey Webb last Wednesday — as part of an American investigation into tens of millions of dollars of bribes — in Zurich that started the process that ended in his walking away from an organisation he has been involved with for 40 years.

Unapologetically divisive, Blatter has had to deal with scandal virtually since his first day in office in 1998.

He came through allegations about ‘brown envelopes’ handed out before his 1998 election and the collapse of the ISL sports marketing empire.

Blatter said he was unfairly blamed for everything that goes wrong in football.

“In my 40 years at FIFA I have learned to live with hostility and resentment,” he said recently.

“However as the German language proverb puts it: sympathy is free, but envy must be earned.”

There is a lot to envy.

Blatter is in 70th place on the Forbes list of the world’s most powerful people — the only sports leader in the group jostling behind the likes of Vladimir Putin and Barack Obama.

He became secretary general in 1981 and was elected to the top job in 1998 after another controversial president, Brazilian Joao Havelange, finally ended his 24 year reign.

When he joined FIFA it was in a small Zurich building with about 10 staff. One story says that it was Blatter who went to the bank to get a loan when they could not be paid.

The workaholic Blatter says his main achievement has been to make football “universal” — the first World Cups in Asia (South Korea and Japan in 2002 although the decision was taken before he became president) and Africa (2010) came in his tenure.

Hundreds of millions of dollars are given to national federations and in development grants.

But since the day he took office, accusations of skulduggery have never been far away from FIFA. In recent months, he has been fighting allegations about the awarding of the 2018 and 2022 World Cups to Russia and Qatar.

Blatter also told UEFA, the European confederation in 2011 that if elected then it would be his last term.

But the FIFA president has never been implicated in wrongdoing and he has always shrugged off controversy — apart from one episode in 2006 when he tried to stop a book on FIFA being published in Switzerland,

While Asia, Africa and to a large extent Central America and South America stood four square behind Blatter at last Friday’s plebisicite Europe turned against him.

UEFA president Michel Platini said the three-times married Blatter made some good decisions “often in difficult circumstances” but that he cannot face a life of “emptiness” without FIFA’s power.

Many questioned how he kept getting re-elected.

“He has a way of making people dependent or indebted to him, but not in a way that people regret it,” one Blatter confidant told AFP.

The people who rely on the man who has dominated world football for nearly two decades will soon have to get used to someone else.