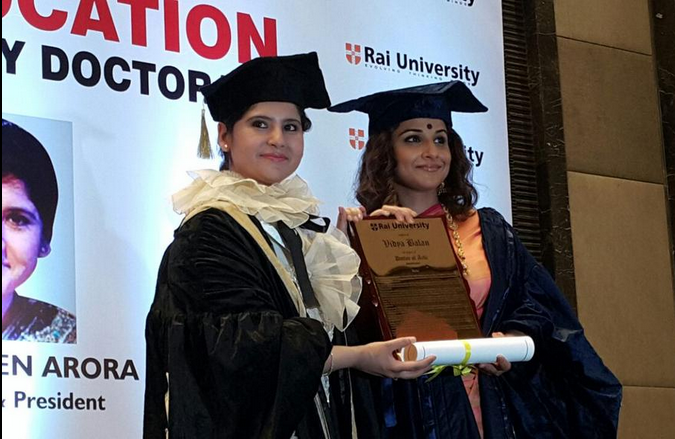 New Delhi: Vidya Balan was conferred with a Doctor of Arts Honoris Causa degree by an Ahmedabad-based institute Rai University to appreciate her contribution to Indian cinema and for her endeavour to bring out the strong side of a woman via the silver screen.

Overwhelmed by the honour, the actress hopes to live up to the honour.

“It is truly humbling and overwhelming to receive this honour. What makes this even more special is that I complete ten years in the film industry this year. “

There can be no bigger compliment for any actor than to have done work that has made a significant mark and also to be looked upon as a role model by young India. I hope to live up to the title,” Vidya said in a statement.

The actress, who ventured into Bollywood with “Parineeta” after her stint on the small screen through “Hum Paanch”, was awarded the degree at a special convocation ceremony held here on Monday.

The Rai University decided to award the actress with the degree for her exceptional contribution to the Indian film industry and for her contribution to empowering womanhood in the country, read a statement.

“Among the league of iconic actors, Vidya is a pioneer in every way. Her films epitomise a distinct Indianness and a powerful womanhood,” Arora said.

On the professional front, the actress will be seen in Mohit Suri’s forthcoming directorial “Hamari Adhuri Kahani”.

It also stars Emraan Hashmi and Rajkummar Rao in lead roles and is a love story that tries to define the true meaning of loving someone selflessly.