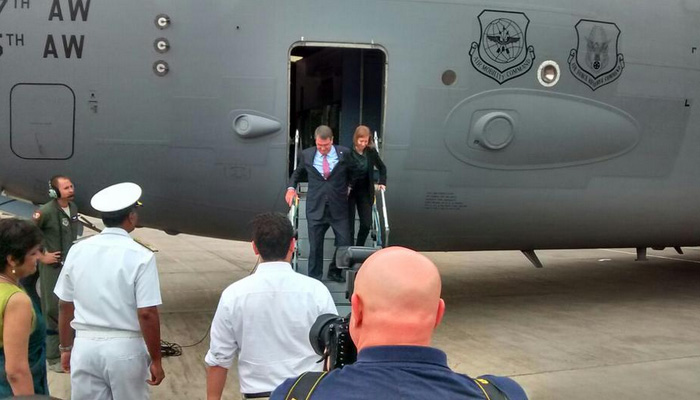 Visakhapatnam:Â US Secretary of Defense Ashton Carter completed his visit to the Eastern Naval Command in the port city of Vishakapatnam on Tuesday afternoon, where he met with senior Navy officials and toured the INS Sahyadri, Indiaâ€™s indigenous stealth frigate, before departing for New Delhi for talks with Indian government officials.

Carterâ€™s trip to India is part of his focus on the US rebalance to Asia.Â  Specifically, his trip to Vishakapatnam showcased his commitment to maritime security and the need for a regional security architecture that creates transparency and trust among regional partners.Â

In India, this positive momentum is especially tangible as Carter will sign the 2015 US-India Defense Framework Agree with his counterpart, Defense Minister Manohar Parrikar, which will help expand the defense relationship between the two countries.

American Defence Secretary Ashton Carter on Tuesday started his three-day visit to the country during which India and US will sign the 10-year defence framework agreement that will steer bilateral ties in the crucial sector.

The agreement, decided during the visit of US President Barack Obama in January, will focus on issues ranging from maritime security, aircraft carrier to jet engine technology cooperation and joint training.

He had last week said the US is looking for new ways to complement India’s ‘Act East’ policy and find meaningful areas of cooperation in the Asia Pacific.

“The 2015 US-India Defense Framework I will sign next week will open up this relationship on everything from maritime security to aircraft carrier and jet engine technology cooperation,” Carter told delegates at the Shangri-La Dialogue plenary session in Singapore.