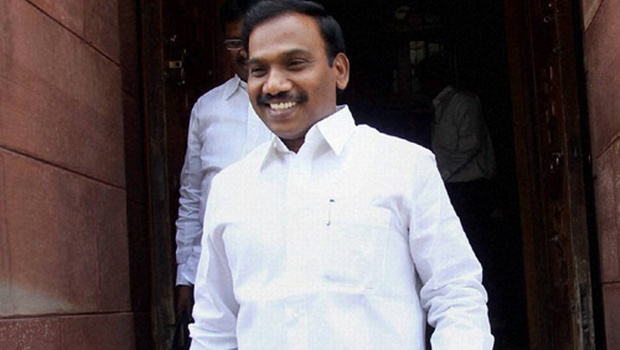 Commencing final arguments in the 2G scam-related money laundering case, special public prosecutor Anand Grover alleged that a conspiracy was hatched by Raja and other accused and Rs 200 crore was the “proceed of crime”.

He claimed that the amount was transferred to Kalaignar TV through various firms and was returned only when Raja was called by the CBI for questioning in 2G spectrum scam case.

He further alleged that “the conspiracy was hatched by A Raja and others, including the companies, for illegally granting telecom licences to ineligible firms.”

Grover also said that the money was transferred to the TV channel through various companies in a circuitous route.

Raja, Kanimozhi, Dayalu Ammal and 16 others, including nine firms, are facing trial in the case.

ED on April 25 last year had filed a charge sheet against the accused for alleged offences under the Prevention of Money Laundering Act (PMLA).

The court had on October 31 last year framed charges against the accused saying that Raja, allegedly in connivance with Kanimozhi, Dayalu Ammal and other co-accused, was involved in “parking” of illegal gratification of Rs 200 crore in Kalaignar TV.

The other accused in the case are Swan Telecom Pvt Ltd (STPL) promoters Shahid Usman Balwa and Vinod Goenka, Kalaignar TV MD Sharad Kumar, Directors of Kusegaon Fruits and Vegetables Pvt Ltd, Asif Balwa and Rajiv Agarwal, Bollywood producer Karim Morani and P Amirtham. All of them are out on bail.

This is the second case in the 2G spectrum allocation scam in which Raja, Kanimozhi and others are facing trial for their alleged involvement.

In the first case probed by CBI, Raja, Kanimozhi, Shahid Balwa, Goenka, Asif Balwa, Rajiv Agarwal, Morani and Sharad Kumar, besides others, are facing trial for criminal breach of trust, conspiracy, forgery, cheating and other offences punishable under the provisions of IPC and under Prevention of Corruption Act.

ED had alleged in the court that Rs 200 crore transaction was “illegal gratification”, whereas the accused had claimed it as legal and genuine.

May 2007: A Raja takes over as Telecom Minister.

Aug 2007: Process of allotment of 2G Spectrum along with UAS Licences initiated by Department of Telecom (DoT).

Jan 10, 2008: DoT decides to issue licences on first-come-first-serve basis (FCFS), preponing cut-off date to September 25. Later in the day, DoT says those who apply between 3.30 and 4.30 pm would be issued licences.

May 4, 2009: NGO Telecom Watchdog complains to the Central Vigilance Commission (CVC) on the illegalities in the 2G spectrum allocation to Loop Telecom.

May 6, 2010: Telephonic conversation between Raja and Niira Radia made public by the media.

April 25, 2014: ED filed a charge sheet against the accused for alleged offences under the Prevention of Money Laundering Act (PMLA).

October 31, 2014: The court framed charges against the accused saying Raja, allegedly in connivance with Kanimozhi, Dayalu Ammal and other co-accused, was involved in “parking” of illegal gratification of Rs 200 crore in Kalaignar TV.Â